Huge creatives dissect the brand of the scruffy new UK prime minister with a penchant for misdirection, telling fibs on buses and spilling red wine on sofas 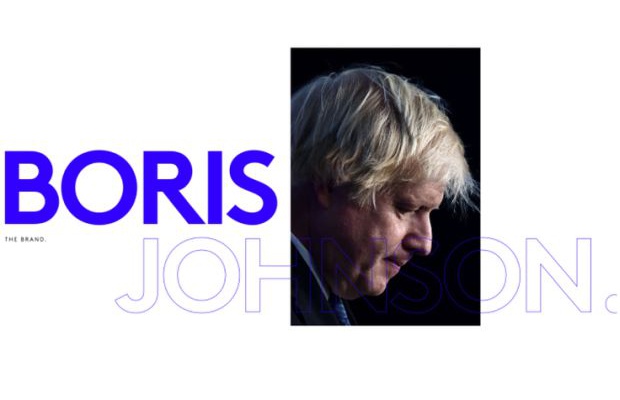 “While this document intends to provide complete clarity, consistency and direction to his approach as leader of the United Kingdom, Boris Johnson will just make it up as he goes along.”
Loath him or love him, Boris Johnson has somehow slipped into the top job in the United Kingdom. His political convictions are still unfolding -if indeed he has any – though his new role is creating plenty of debate around the country.
It turns out Boris isn't even his real name, but that hasn’t stopped Alexander Boris de Pfeffel Johnson creating a real brand for himself. Beneath the scruffy hair and crumpled suits, it’s a brand that’s been carefully crafted throughout his tenure as a journalist and years spent as a regular on political comedy shows like Have I Got News for You.
Creatives by their nature are not fans of politicians and it seems a bunch of creatives and technologists at Huge London decided to take a closer look at the brand. They’ve created a set of spoof Brand Guidelines for Boris. The team are calling it ‘Boris The Brand’.  It is the kind of design brand guidelines large corporations or consumer brands have for their design outputs this time instead for a human.
Boris is keen on aggressively promoting himself as a living brand to the country so the team thought it was only fitting to do these spoof guidelines as a light-hearted poke to challenge themselves in creating something normally reserved for designers on how they use a brand. The Brand Guidelines is of course not real or official but is in tongue-in-cheek ironical poke on Boris’s and captures some of the things and actions he has said publicly that are polarising, ludicrous or amusing.
“We just thought he’s spent his entire career creating this brand for himself, with the ultimate end goal of reaching number 10. On Wednesday he achieved it. So we thought we’d take the piss by creating a set of Human Brand Guidelines for him. No political stance, just complete truth based on his own words and actions,”
said Creative Director Hari Bajwa. 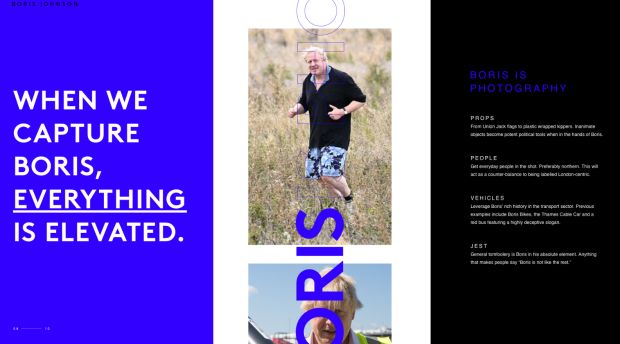 Hari continued, “We reached out to Getty who were into it - which was great. I guess for them it also showcases the power of their library to do something cool with stock imagery in a fresh way that hasn’t been done before.”
The spoof guidelines aren’t taking any political stance or view but are part of an on-going activity. Employees often set themselves imaginary briefs to tight deadlines, allowing them to test their skills and set their brains free. 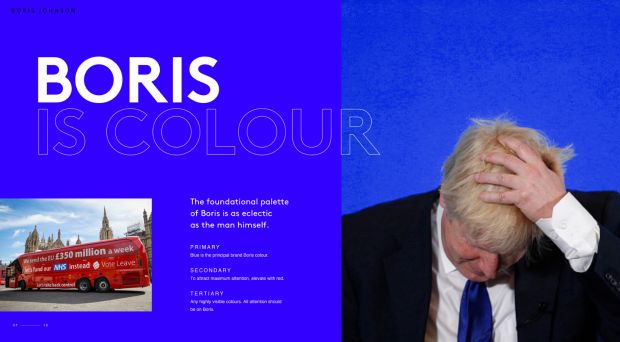 The creatives have been careful to avoid any political positioning, though they have satirised many of the new PM’s infamous gaffes and mistruths. And so the bright red ‘Boris Bus’ bearing the untrue claim that the NHS would receive an extra £350m a week after Brexit, appears in the colour palette slide. The ‘Dos and Don’t’ page also highlights Johnson’s tendency to take credit and pass the buck, as demonstrated during his stint as Mayor of London.
‘Boris The Brand’ guidelines are live at https://boristhebrand.com/