DDB Latina campaign honours the former Brazilian athlete Aída dos Santos, who represented Brazil without having a uniform or any type of incentive 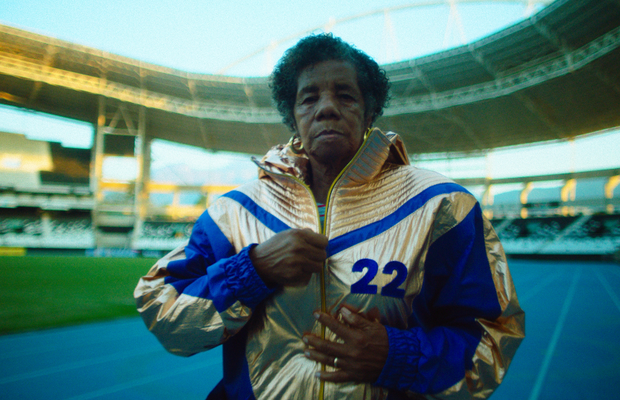 The year is 1964, a challenging political period in Brazil, but the beginning of one of the greatest sporting legacies in the country, followed by Aída dos Santos. A poor black woman, she was the first Brazilian athlete to participate in the Tokyo Games, in the midst of an all-male delegation. Raised in a community in Niterói, Rio de Janeiro, Aída went alone to the other side of the planet without money or coach, nor did she have a uniform to compete. No structure or support. But, contrary to all estimates, she made history and came back with fourth place in the high jump, the best individual result for a Brazilian athlete for over 30 years. Shedding light on this journey, so important and, at the same time, extremely difficult and still little recognised, the Centauro honours Aida with ‘The uniform that never existed’.

The largest multichannel sporting goods network in Latin America, which carries in its values ​​the democratisation of access and encouragement to the development of sport in the country, invited the ModAtivismo stylist, Carol Barreto, to create and produce unique pieces of the uniform that should have accompanied Aída in her competitions, inspired by the trajectory of the former athlete. In addition to thanking her, the design, manufacture and delivery of the uniform she never received is intended to enhance her achievements, tell her story and emphasise that it is necessary to do differently. It is also important to remember that many young women can follow a better and less arduous path, with more inclusion and encouragement to sport.

“The legacy that Aída left us needs to be remembered forever, with more value and recognition. We know that we cannot change the mistakes and attitudes of the past, but we must make changes now, from now on. Honoring Aída is a step in the attempt to reframe a remarkable moment, but also a very sad one in her history and that of so many other athletes. And Centauro, as part of an ecosystem that believes in sport as a life-changing agent, is very honoured to be able to honour it with something that, although so simple, is so significant for all athletes", comments Gustavo Milo, executive manager of the retailer's marketing.

Now, 84 years old and without seeing any previous details of the outfit, Aída was invited to receive her uniform at the athletics track at the Nilton Santos Olympic Stadium, in Engenhao, in Rio de Janeiro. The emotion of that moment was captured and transformed into a film called ‘The uniform that never existed’, with voice by one of the greatest singers and songwriters in Brazil, Sandra de Sá.

Created by the agency TracyLocke Brazil and produced by Lady Bird, with stage direction by Giorgia Prates, the production follows the surprising delivery of the uniform, in addition to bringing testimonials by the athlete, participation by Carol Barreto, passages in the stylist's studio and, above all, images of the past and present of the entire journey of Aída dos Santos. In addition to the film, the campaign also includes an action with influencers and sports personalities, conducted by the Giusti agency, with the aim of expanding the repercussion of this story, and media strategy on Rede Globo, with insertions on GE São Paulo (TV) and digital.

“We conceived the idea of ​​the Uniform that never existed 9 months ago at TracyLocke Brazil. It was a real pregnancy. A project that has yielded many tears along its path and that fills us with pride. Not only for the homage to Aída do Santos, which would be enough, but also for having the chance to think and be able to count on talented professionals, of Aída's stature, to lead this project. Carol Barreto, stylist, creator of the uniform. Giorgia Prates, director who had the right sensitivity to tell this story and the unmistakable voice of Sandra Sá. The feeling is of mission accomplished by delivering the uniform to Aída in this way”, comments Daniel Ottoni, CCO of TracyLocke Brazil.

The uniforms and their legacies

Created by stylist Carol Barreto, creator of the ModAtivismo project, which works to unite fashion with feminist and anti-racist activism, the two uniforms made for Aída are loaded with meaning and symbols, representing her memories.

One of them is the training leotard with golden details on the sides of the hips, creating continuity to the sinuous lines and reinforcing the idea of ​​movement, fluidity, agility, femininity, in addition to symbolising gold. In a shade of green mixed with yellow, the elastic details bear the athlete's name. This same elastic adorns the upper part of the armholes and the bottom of the jumpsuit, which draws the letter 'A' in an inverted position on the back. The athletics tracks are also interpreted on the sides of the waist in terracotta colour, with white lines.

The delegation uniform is made up of a jacket and pants made in gold and blue. At the top, the front pockets are personalised with prints inspired by the place where Aída lived with her family, in Niterói, Rio de Janeiro.. In the centre of the back, an embroidery highlights the image of the athlete jumping, symbol of the project. Meanwhile, the chest has a 22 stamp, considered his lucky number. The jacket also has a structured hood, designed not to hide the embroidery on the back and maintaining the functionality and practicality of sportswear.

In a limited edition, 20 exclusive pieces were produced, which can be found on the Centauro website (www.centauro.com.br/aidadossantos). The revenue generated from sales will be donated to the 13 NGOs served by Centauro Transforma, a program that is committed to supporting organisations that make sport a lever for educational and social inclusion, especially for young people and children in vulnerable situations. To learn more, visit: http://transforma.centauro.com.br/

Stylist of The uniform that never existed: Carol Barreto

Production Line: How SunsetDDB is Taking a Lead on Green Production