Sportsbet Tells You to 'Bet With Mates' Amid an Alien Invasion 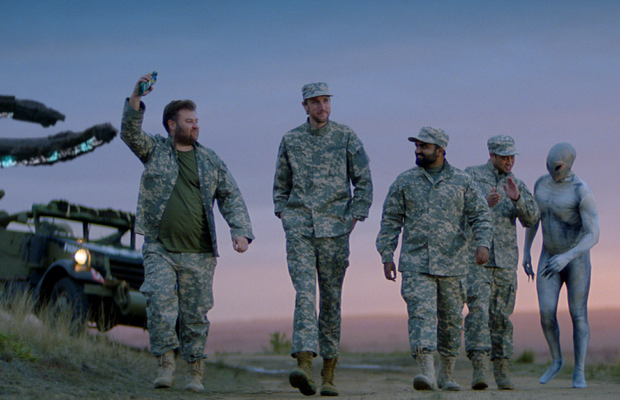 Sportsbet has launched its game-changing new product, Bet with Mates, with an integrated campaign that proves saving the world from an alien race can wait - if you’re still alive in the quaddie.

The new campaign, created by Sportsbet’s inhouse creative team with production partners Palomina and ARC Edit, heralds the newest and easiest way to group bet; doing away with pesky offline organisation in favour of a simple to use feature on the Sportsbet app that allows customers to share in the moment.

Jason Thatcher head of brand and advertising, Sportsbet said: “We’re very excited about this new product and equally excited about the campaign. It’s all about ramping up the fun of betting on sports, horse racing and everything else Aussies love to take a punt on, but at a group level. The product is easy to use and solves a common customer problem. And the campaign is fun, tongue-in-cheek and connects directly with our audience.”

The creative features three 30 second TVCs and one 45 second execution all set in different, cinematic scenarios. Whether it’s a Game of Thrones-style standoff or an interdimensional challenge to save the future, the humble heroes always seem to get the final say.

Rambo Goraya, creative director, Sportsbet said: “We wanted to hit a real granular point of relatability for those punters who enjoy a bet with mates (apologies if you don’t know what a quaddie is) but bring it to life in an unexpected and audacious way. Our customers have all watched enough Netflix to realise it’s about time a bunch of cheeky mates got a start in a movie scene discussing their anytime goalscorer bet. We hope punters enjoy watching them as much as the Sportsbet and Palomina teams did making them.”

The Bet with Mates campaign is supported by bespoke edits for social media channels including Instagram, Facebook and Snapchat, plus a national radio campaign, OOH and selected major press ads.

The campaign goes live across FTV, PTV and Digital on June 6 and will be aired across various channels for up to 12 months.

Daniel Fry Takes the Reins as EP at ARC EDIT