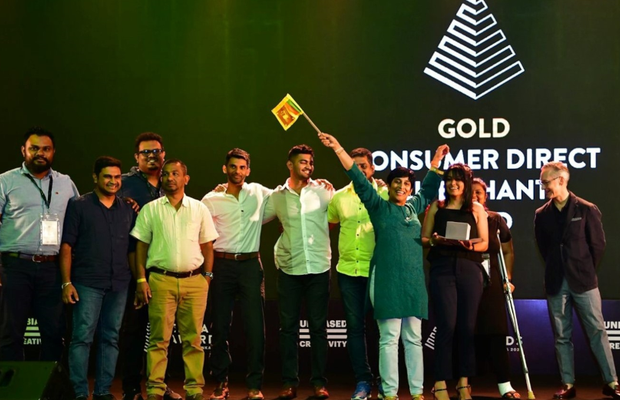 Every now and then a campaign comes around that is so powerful, so simple and so effective it changes society in ways that are unpredictable. For Sri Lankan agency Triad that was the ‘Inherit His Name-Inherit His Way’ campaign for the National Muslim Collective, which stemmed from creatives in the agency witnessing the water wastage from ablutions before praying in a mosque.
The simple call for those who are called ‘Muhammadh’ – 90% of Sri Lankan men – to inherit the ways of the Prophet Muhammadh (Peace be upon Him) and use less water each time they prayed had a stellar impact. On a regional level it vastly reduced the amount of water wastage in the country, but on a global level it put the agency and Sri Lanka on the creative map. They won two awards at the Indie Awards, were shortlisted at D&AD and have been celebrated in countless industry publications.
The agency began in 1993 and after almost 30 years of operating out of the country’s judicial capital Colombo, the agency and its creatives know a thing or two about how to drive communications in Sri Lanka. To hear more about this, the campaign and working with a trilingual market, LBB’s Natasha Patel caught up with Zeeshan Saligh, creative group head and Varuni Fernando, joint managing director and chief creative officer at Triad.

LBB> In a few years’ time, Triad will be three decades old, but let's go back to the start…how did the agency come about?

LBB> The agency won the Gold Award in the Public Good category and Best-in-Show at the Indie Awards for 'Inherit His Name- Inherit His Way'. Where did the idea for the campaign come from and how did you bring it to life?

Zeeshan> From a very young age I used to accompany my father to the mosque for the five daily prayers. And every time I noticed people not paying attention to the wastage of water from the tap while they performed ablution (which is a cleaning ritual performed before prayers). So I wanted to educate people to use water sensibly and moderately according to the teachings of Islam. So when I started to look for a solution three things popped out:
Prophet Muhammad (PBUH) himself had mentioned and taught his followers the ways in performing ablution with as little water as possible without wastage. And wasting water while performing ablution was actually a sin.
The Prophet (PBUH) also had used a vessel (called a Mudd in Arabic) in which to hold the water for ablution. He used to perform ablution with just one Mudd which is less than 650ml. The unique insight being that 90% of Sri Lankan Muslims have the name Muhammadh in their names. Having the name is regarded as an honour and a commitment to inherit his ways.
So, we combined both of these together and created the Mudd. Using clay like in his days, which could hold 625 - 650ml water and printed the saying by the Prophet (PBUH) which talks about not wasting water and launched the campaign "Inherit his name inherit his ways' on the World Water Day which happened to be a Friday (a special day in the week for Muslims).

LBB> What was the public reaction from the film? And how did non-Muslims react?

Zeeshan and Varuni>Since it was launched on the World Water Day which happened to fall on a Friday coincidently, the largest congregation for the weekly prayer, people were taken by surprise. First to know that Prophet Muhammad (PBUH) himself had taught us the ways to conserve water and the Mudd was proof of how little water was used to perform it.
Also the amount of water (650ml) was a shock for most of them because it’s so little compared to the amount of water used by one person for ablution which is on average about five–seven litres on a running tap.

LBB> Tell me more about Sri Lanka’s creative scene as a whole. What drives communications and where do you see this going in the future?

Zeeshan and Varuni> The Sri Lankan creative scene has transformed from being mere translations of English taglines to truly insight based meaningful communication that has the teeth to power brand building communication. An industry which was dominated by the English language has evolved to become local dialect driven and idea based. The conventional ideator too has transformed from his or her traditional thinking and outlook and given the space to a younger, digitally savvy, more globally exposed creative mind who’s crafting his or her thoughts looking at new media engagement.
Homegrown ideas however, remain a precious commodity in the brand building exercise.
Ours is a relatively small industry. Therefore Sri Lankan homegrown creativity may not get showcased as much as we would like it to be. The phenomenal costs of submitting one's work may also be a key factor resulting in this reality. However, in the recent past few of the dynamic multinational agencies, assisted by their global networks and some of the indigenous local creative maverick agencies, have successfully won at both regional and global award shows. The hunger for creative recognition is somewhat lacking even amongst the youthful creative literati of Sri Lanka who seem more complacent and content to perform in the local arena. But what is unique about Sri Lanka’s truly local insight based communication campaigns is the unadulterated content that is crafted to suit a brand. These concepts are woven around truly local imagery and insights. They make sense to the local audiences that the communication is speaking to. It’s no secret however that Sri Lanka is a creative hot house waiting to be discovered.

LBB> One could call Sri Lanka ‘trilingual’ due to the Sinhala, Tamil and English languages spoken. From a creative and campaign perspective how is it creating something that will have to be translated possibly three times to reach a wide enough audience?

Zeeshan and Varuni>In Sri Lanka, there are three working languages of which Sinhala is spoken, written and understood by the majority with Tamil a second and English being a link language. On the most part, building mass brands will encompass communication being developed in Sinhala, to reach a larger base. The same offering in Tamil will be either thought of separately in Tamil or become a translation of Sinhala if it's just a product or service offering.
If however a brand is particularly promoted to Tamil speaking audiences, then the ideating takes place in Tamil. English on the most part becomes a translation as the exclusive English speaking audience is a bare minimum. It is used mostly to communicate sophistication, technological advancement and corporate thinking.

Zeeshan and Varuni> Radio used to be super important because not so long ago people in the deep rural areas were mostly reached via radio. However, this pattern has changed with television breaking new ground and the entire population by and large being exposed to television. Today, radio advertising has become an affordable support medium on a comprehensive media plan. But, radio has and will always offer an exciting playground for creative minds to play with.

LBB> Covid-19 has changed a lot, not least the e-commerce scene. What does this look like in Sri Lanka?

Zeeshan and Varuni> E-commerce is an invention of the modern age. We have found that on the most part, these digital solutions break a default habit, given unique circumstances which make online shopping necessary. But when life reverts back to normal, the tendency is to revert back to the original status quo. The Covid-19 debacle is a perfect situational issue where people were compelled to shift to online portals short term, to order their daily needs. Although it's a convenience hitherto minimally experienced, it does not mean that this habit will be continued long term once people have the freedom to move about to shop at will.

Delay Is the New Denial

It All Starts in the Office

Why thenetworkone is Creating a Sustainable Development Essay Collection