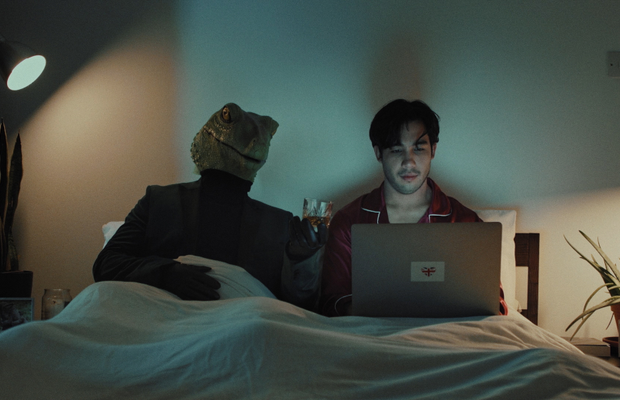 Not Just One Day, the campaign created by STAMMA and VMLY&R, conveys how stammering can become more mainstream and questions why it isn’t already. Launched on October 22nd, International Stammering Awareness Day, the campaign urges watchers to sign the petition which demands more representation for stammers throughout the media.
With a third of adults saying they stammer, the key is hearing voices that sound like your own. A hilarious inner monologue narrates the piece, asking, ‘How is signing my name on a petition gonna change anything?’ Followed by a series of rhetorical statements about a fantasy football addiction, fuel shortages and tapping into conspiracy theories about Prince Harry being a lizard, the comedic spot shows why inclusivity is so important - and why the petition needs signing.
To explain how this campaign was created, Daniel Liakh, creative at VMLY&R and the Acid News team speak to LBB’s Nisna Mahtani.

LBB> What was the initial brief and how did you decide on creating an internal monologue for the campaign?

Daniel> We got a call from Jane Powell, CEO of STAMMA, who we have a very strong and honest relationship with. She said that STAMMA had a petition with an interesting idea at its core and asked whether we might be interested in creating a film to help launch it… with just one catch, it needed to be ready in just over two weeks!
Well, we said yes immediately and then spent a sleepless night wondering whether we’ll actually be able to pull it off. But the beauty of working with extreme limitations is that it sort of puts you in a box that you can decorate whichever way you want. I wrote three ideas, and the third idea made all of us smile because it’s what most of us feel when we see yet another petition. Especially if you’re an immigrant in your mid-twenties with a stammer trying not to drown in the repetitive news cycle and social media angst. The main challenge was to not make it overly dark and sad, which I hope we didn’t…

LBB> You worked alongside STAMMA, who are experts in the field. How involved were they and what did they think of the campaign idea?

Daniel>  STAMMA are our clients, but we consider them more our partners. Partners that everyone would wish to have. Brave, no-nonsense and just cool. Because of the time constraints we knew we had one shot to get this right, so we went from initial script to treatment in one week. And all without the 100 zoom calls, tissue sessions or social posts mockups. Just two teams working together day in day out.
The only way this was possible was because both ourselves and STAMMA wanted to make the idea happen - especially as it has the power to make a positive difference for so many. A huge number of things were ironed out, made better, stranger and funnier once we began to actually make the work and stopped talking about ephemeral concepts. It takes a good partnership to do this and I wish there were more of them in our industry.

LBB> How long did the ad take to create and were there any challenges?

Daniel> We had an informal call with a brief on 24th September and we got the offline edit on 19th October. The main challenge was to eat well and to remember that at the end of the day it’s just a film, an ad, a project. But when you’re so passionate about the idea everything is hyper heightened; whether it’s the joy of getting an amazing sound designer on board, or the stress of realising you have even less time than you planned for, it’s all worth it in the end. Even more so when you have the best crew you could wish for - big shout out to Acid News, POD LDN and Jungle Studios.
Acid News> We shot the film in two evenings and one early morning. It was a project made out of sheer love, so we were making it on top of our working days. It was a classic case of ‘it never rains, it only pours’. We had three shoots over five days that week so trying to manage the logistics of getting kit from place to place and paying enough attention to everything was probably the most challenging thing. It all paid off in the end. Pressure makes diamonds.

LBB> Why is it essential to get this message out to as many people as possible and encourage both the awareness and representation of stammering?

Daniel> I personally think the world of stammering is quite an interesting world of stories and experiences that is generally untapped. I’m biased, as I have a stammer myself, but isn’t it refreshing to hear imperfect and disfluent speech sometimes? But most importantly this message can help 70 million people to understand there is nothing wrong with them. Getting the film out there helps prove that.

LBB> It was necessary that the narration included a person with a stammer, for obvious reasons. But what was the process of writing the script and how often did it change before the final version that we hear?

Daniel> The best part about our narrator is that he hasn’t been contracted to do voiceover work before, so this was a real experiment. However, it also made sure we had a completely raw and honest voice. Big shout out to Paul Roberts who took the brief, went to the studio by himself and nailed it from pretty much the first take.
As for the script itself, first, we had to make sure that every line made sense on its own but could then be made stronger by the visual that goes with it. There’s a lot of work you see where the visuals carry the voiceover, and we knew our film needed to be more than that. In truth, we just had fun writing the inner monologue of a really fed up person. With STAMMA’s help we really tightened up the ending to land the messaging, and then in the edit, we threw some of the scenes and lines out to make it even tighter. All to hit the 90-second mark (it was much longer before).

LBB> The humour in this ad is fantastically British. Why was it so important to use humour to grab the audience’s attention?

Daniel> Can you please send this one specific compliment to the Home Office when I am applying for a passport in a couple of years? This is really flattering, as this ad was written by a Ukrainian and an American.
Jokes aside, this is something we spoke to STAMMA about extensively on our first call. I think everyone today is overly bombarded by campaigns that are extremely serious (sometimes for the right reasons) and as a result, it’s really hard to cut through the noise, especially when your cause isn’t as widely talked about as others. That’s why comedy was the first thing we agreed on, as it allowed us to talk about serious things in the silliest way possible. It also allowed us to say ‘sausagéé in lift-off’ in a charity spot.

LBB> How have people taken to the campaign and can you tell us about the most memorable reaction you’ve seen/heard?

Daniel> From a personal point of view, I think working on this ad made me come to terms with my stammer even more than I could before. The most memorable reaction was a couple of my friends and cast members openly admitting they stammer or used to stammer as children. That is the ultimate goal of a film like this… I do, of course, hope everyone else liked the film too, but getting even a couple of such stories out of this whole process is just amazing. As a more tangible result, we saw Ofcom endorse the campaign and over 15,000 people have currently signed the petition - so I think we must be doing something right!
Acid News> We can’t speak for everyone but we hate selling ourselves. Fortunately, STAMMA and the wider team were happy to talk about the work and the right people heard. Seeing it get some traction and good press makes us really happy because it’s for such a good cause.

Daniel> As creative people we’re always hunting for ways of making our work more interesting, different and fresh. So cast a stammering voiceover or write a non-cliche story about someone with a stammer next time. It’s a win-win really.
Acid News> Not many people would buy this kind of film or script. So STAMMA choosing to have a bold voice and put out this film speaks volumes. Big love and respect to the team and Jane.