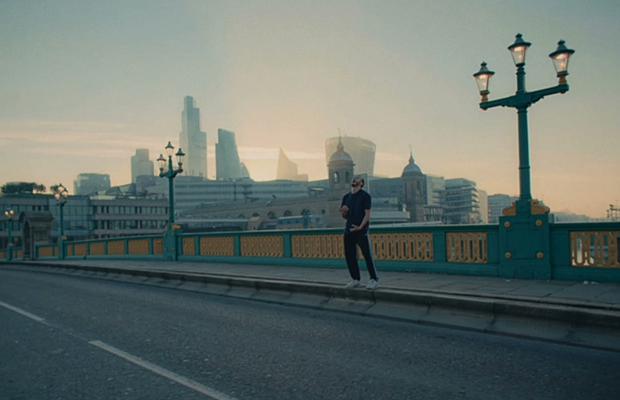 The Coronavirus pandemic has had an overwhelming impact on every aspect of our lives, from restrictions on our movement to challenges for our mental health. As a result, these struggles are becoming an ever-growing point of discussion, as issues that were once kept private are beginning to enter a more public sphere.
A desire to explore mental health issues, through raw depictions of movement, drove Great Guns director Calum Macdiarmid to create his latest film, ‘Stillness’, which premiered this week on NOWNESS. Set against a deserted London skyline, the choreographed short stars movement artist Harry Price and is accompanied by a powerful spoken word poem from Calum’s brother, Fionn Macdiarmid.
The Great Guns director is well-versed in lockdown shooting procedures, having helmed numerous projects throughout the past year that required everything from remote directing, drones, and even filming through people’s windows. For ‘Stillness’, Calum and a crew of four rose at the crack of dawn to capture this seismic portrait of mental health struggles.
Here, LBB speaks to Calum about his experience working on the film, from its organic evolution throughout production, to what he’s learned from remote shooting in the past year - as well as his own thoughts on society’s attitude towards mental health.
The short film premiered this week on NOWNESS

Q> You’ve noted that the film initially began as a reaction to the pandemic in terms of space and the regaining of public spaces, but evolved to focus on mental health. What was this journey like?

Calum Macdiarmid> The production of the film was extremely organic. It began with an intention to make something really raw with regards to movement - both in terms of the dance and the camera’s interaction. Max [Witting, DOP] and I were sharing camera movement references before we really knew what we were filming. We wanted to avoid steadicam so that the audience felt more like they were running around within the scene themselves.
Obviously the city area of London had been shut down so it was the perfect space to explore the movement and I liked the idea that for a brief minute it would feel like we owned that little bit of space.
George [Williamson, choreographer] and Harry began putting a dance together with the general brief of something that felt loose and not overly worked. I loved what they came back with as it had this brilliantly twisted abstract aesthetic. During these rehearsals (usually viewed by WhatsApp), something I became interested in expressing was a sense of bubbling jagged tortured energy... I guess something that I was feeling at the time. During all this, the pandemic was continuing to evolve at a rapid pace and the welfare of everyone’s mental health suddenly became very apparent.
I asked my brother Fionn to write a poem about mental health after we’d been talking about it. The poem was never part of the original plan but whilst that part of my vision had evolved... for me it still felt like we were telling the same story.

Q> You’ve directed a number of projects throughout lockdown, battling various restrictions and new approaches to filmmaking. What was your experience like in this instance?

Calum> I was definitely one of those annoying people who suddenly went into a mad overdrive of activity. But mine was less motivated by the ‘now is finally my chance to do that thing’ and more a case of reacting to the fear of how I was going to feed the family after having seen all the commercial film sets shut down. What I enjoyed about working in those conditions was the challenge of writing an idea that was safe. How do you make a compelling film when you’re restricted to such a limited crew? This usually means focusing on just one performer and adding some super simple technical element that gives the film personality.
Another film I shot around that time was a music video for the rapper Big Vinny... we did it all without him leaving his house, he just leaned out his window and performed to the camera while we did one super long zoom in. It was literally just myself and Max stood a couple of meters apart from each other in a car park. Once we had it shot, Max packed up his kit and we both drove our separate ways.
In this situation we had four people in the crew but due to the expanse of the bridge, and nature of the shoot, we were able to create plenty of distance between us whilst also wearing masks etc.
The promo for Big V1ne’s single ‘Newham’, shot during the height of restrictions

Q> This isn’t the first time you’ve utilised striking choreography to represent personal, emotional issues - such as in Empathy Test’s ‘Monsters’ promo. How did you approach the choreography for this film? What was it like collaborating with Harry Price?

Calum> The dance part really came together through George Williamson. He’s a very experienced choreographer who was keen to do something for the sake of art and it was him that found Harry Price. Because of Coronavirus restrictions I only met Harry once (from afar!) and for the rest of the time it was really all down to George and Harry exploring movement and working away through the dance. After my initial brief, my only notes were to bring the dance to some sort of an emotional finale.

Q> Do you think art and filmmaking is the perfect vehicle for exploring mental health? What do you hope this industry - or even society as a whole - achieves with its approach to the issue going forward?

Calum> There are certain aspects of mental health that are so abstract it’s impossible to describe. Many people aren’t even aware of their own mental health issues and couldn’t articulate them if asked. There are parts of society that have a good awareness of the importance of mental health, engaging in discourse, and even treating it like any other aspect of their personal health and fitness. But there is still a large part that has yet to understand the importance of it, or how it affects their lives, and how to temper it.
Calum’s promo for Empathy Test, which also utilised striking choreography to represent personal, emotional issues

Q> Did you face any interesting challenges during production? How did you overcome them?

Calum> For the most part, the shoot was actually strangely easy... I mean we had to wake up at 3am to catch the empty roads and rising sun - that’s never easy - but due to the restrictions in place the idea needed to be executed in the simplest way possible. Not having things like stylists, hair and make-up, runners, 1st ADs, lighting, DITs kept it all so lightweight it meant we could just focus on the truth of the scene rather than trying to dress it up too much.

Q> Can you give us any insight on what you may be working on next? Any big projects on the horizon?

Calum> Yes, I’ve got something a little bigger coming up that I’m very excited about. It’s a ten minute film which will also feature a dancer… only this time it’s more focused on what he has to say… which will blow people’s minds. But that’s about all I can say for now!