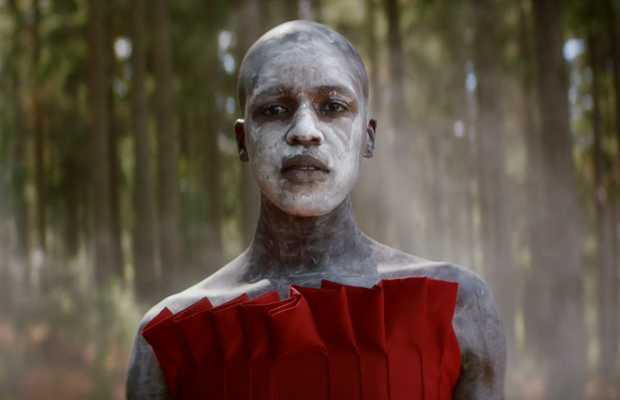 Great Guns director Meena Ayittey and director Greg Rattazzi have today released a striking new short film, named ‘And I Shall Rise’. Produced by Groundglass, the film is a powerful, poetic exploration of identity, acceptance, and the role of motherhood in South Africa’s LGBTQ+ community, and stars drag artist and activist Belinda Qaqamba Ka-Fassie.
The 60-second short is a visual spectacle, beginning with a shot of Belinda - wearing a stunning red dress and white body paint - walking through the forest. The following scenes, which include Belinda illuminated by the setting sun on the coast, are accompanied by a poem written by Meena Ayittey and director and editor Greg Rattazzi. The words of the poem blend with the visuals, crafting a depiction of identity and acceptance in the LGBTQ+ community in South Africa. Alongside Belinda’s performance, we also see vignettes of other drag queens from the community, accompanied by their mothers.
AND I SHALL RISE
Can you see me?
As I fly high above this earth
A weighty query stains my love,
Deep down affects me since birth
Is it beauty you’re afraid of?
You say we are different, we are not the same
Agreed, yes, but aren’t we all?
Two arms, two legs, two eyes, one blame,
What is different after all?
Close your eyes, feel your mother’s hand
Gentle angel feather across your face.
We come from the same land,
We end in the same place.
The idea for the film arose when Meena and Greg were travelling through Cape Town. Whilst at their hotel, they came across a photo of Belinda and, captivated by the image, reached out to her. Looking to tell her story and explore her work as a drag queen and activist, they met with Belinda to speak about her life - and the difficulties she had to overcome in order to come out as queer to her family. Although her mother had no issues with Belinda’s sexuality when she found out, the first thing she said was ‘you can’t tell your father’. Belinda spoke about her struggles at school, facing bullying for being different, and her experiences growing up queer in the small town of Elands Bay. After studying, she moved to Khayelitsha and began honing her stage persona and appearing in drag shows.

Earlier on their trip, Meena and Greg had witnessed a group of boys, around the age of 12-13, naked from the waist up and walking into a forest. They were told the boys were ‘going to the bush’ as part of a South African initiation process. When they mentioned this to Belinda, she opened up about Ulwaluko - the ritual of male circumcision that many South African boys go through to mark their transition to manhood. As a young person coming to terms with her sexuality, Belinda had found the process very hard - noting that some queer children are traumatised during the ritual, whilst some never make it back.
Belinda also discussed her involvement in teaching mothers of queer children how to deal with their child’s sexuality - a conversation that sparked the foundation of the film’s narrative. An unflinching and solid source of support in a young person’s life, South African tradition sees mothers as people whose opinion cannot be questioned. Focusing on this theme, Meena and Greg crafted a poem that captured the essence of a mother as both a guiding light and unifying presence in their child’s life. The duo then made several trips to Khayelitsha, mixing with the locals and forming a close relationship with Belinda and her circle of friends who perform together under the stage name Black Drag Magic.

Director Meena Ayittey comments: “It was at this stage that Belinda suggested that her fellow drag queens should also be in the film, as they symbolise how she has an additional ‘family’ which is now also part of her persona. We reworked the script to reflect this, wanting the film to encapsulate both Belinda’s childhood with her mother, and the painful initiation ritual she went through before finding herself accepted by her new family, Black Drag Magic. Rather than being a film about just Belinda, we realised this should be a film about identity - a celebration of being accepted for who we are.”
Meena and Greg also worked with Khayelitsha-based designer - and Belinda’s long-time collaborator - Thobey Cooper to create the stunning red dress that would both recall a traditional Ulwaluko blanket, and reflect Belinda’s sexuality. The crew also included DOP Felix Seuffert, Executive Producers Sheridan Thomas and Kate Phillips, and editor David Warren - who’d previously collaborated with Meena on her award-winning short ‘Mama’.

Per Diems are in the Envelope: Part 2

Per Diems are in the Envelope: Part 1