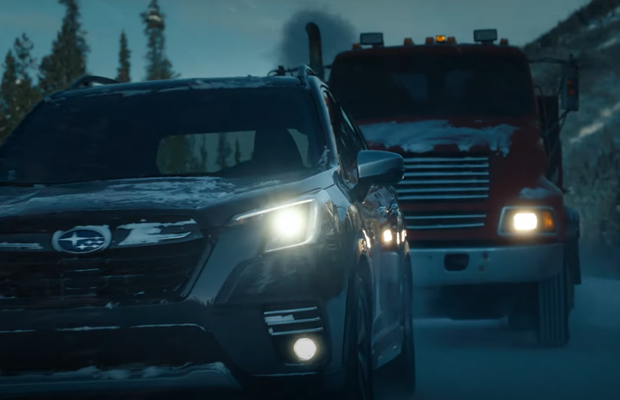 Fresh on the heels of launching their new brand platform, Subaru Canada is introducing a new and uncommon Winter campaign.

Using an integrated, multi-media approach, the campaign demonstrates Subaru’s uncommon capability and safety in threatening, winter environments. Within the launch spot we see a Subaru Outback and Forester taking on treacherous conditions that leave the viewer on the edge of their seats. We open on both vehicles driving down a winding, icy mountain road, in what looks like a daunting situation. As the drivers approach each other, the driving shots rapidly cut between both parties. The tension quickly rises as viewers can feel the drama building inside and outside of the vehicles. Just as they meet up and pass by each other, we see that everyone is safe and that both Subaru’s are more than capable at handling the harsh conditions.

“This campaign builds from our brand platform launch in the fall, in an exciting way,” says Cynthia Bouris, vice president, marketing and brand management. “We wanted to clearly demonstrate an uncommon advantage our vehicles have when it comes to capability and safety in the winter months. We believe this campaign will give consumers a reason to further consider a Subaru when it they think about their next vehicle purchase.”

Subaru Canada is launching this Winter campaign by also leveraging social media along with high impact digital, and traditional media.

“For us, we needed to really create the tension. Not just in the tone but also with the volume of snow and show the viewers just how unforgiving these environments were,” says Wain Choi, executive creative director at Zulu Alpha Kilo. “Playing that tension off with the actual capability and safety of these vehicles is what makes this a compelling campaign. We’re excited to see it launch!”

How These Agencies Invited the World to Feel What Ukrainians Feel