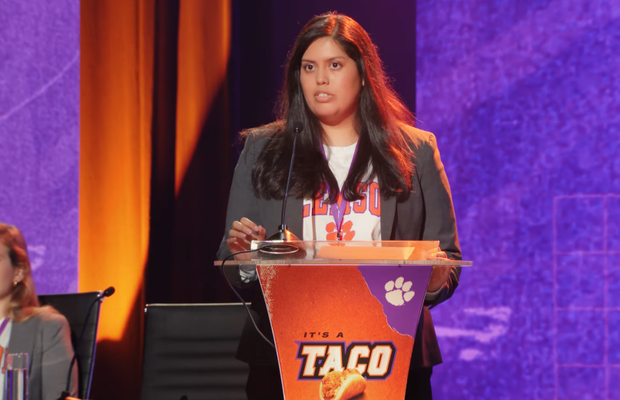 Is Taco Bell’s new Crispy Chicken Sandwich Taco a sandwich or a taco? The sandwich debuted earlier this year in test markets as a new innovation in the chicken sandwich wars, Taco Bell’s crispy chicken sandwich taco grabbed national consumer attention and brought on heated debate – is it a sandwich? Is it a taco? Can it be both?

To help us tackle the question and encourage the discussion, Taco Bell is launching a new campaign that brings in the experts: two real championship-level college debate teams. 'The Great Crispy Chicken Sandwich Taco Debate' launches nationally Saturday 9/4 during one of the most anticipated match-ups of the college football season: No. 3 Clemson University vs. No. 5 University of Georgia, airing on ABC.

The campaign puts the #SandwichTacoDebate in the hands of real-life student athletes from Clemson and Georgia’s debate teams. The arguments were developed by the students themselves, who also play a starring role in the ads:

“Simply saying that because there’s ‘taco’ in the name means it always and forever will be a taco is a very reductionist form of thinking rather than looking at the benefits of calling it a sandwich.”

“This is a sandwich that is in the shape of a taco. It is taco-inspired, but it is still a sandwich. While all tortillas are bread, not all bread is a tortilla.”

The Great Debate amplifies the #SandwichTacoDebate on a national stage, airing on ABC in a way that’s equally must-see as the football game itself. Taco Bell is flipping the script and giving our unsung heroes – the college debate students – the spotlight they deserve in similar fashion to how NCAA athletes are typically treated.

Made in collaboration with creative agency Deutsch LA, the integrated effort features a 60 second hero spot airing in the first quarter of the game, two :30 spots running in the second quarter and fourth quarter (respectively), and a final :30 debate highlights spot that will continue to air in the weeks after the game as well as on social. Additionally, the campaign will utilise ESPN commentators in the game immediately following Clemson-Georgia, with them throwing to the 60 second spot during halftime of the BYU-Arizona game.

And because we all know the internet loves a good debate, the campaign encourages audiences to weigh in via an array of social activations (paid and organic). Partnerships with influencers and SportsNation will also help to hype and extend the Great Debate.