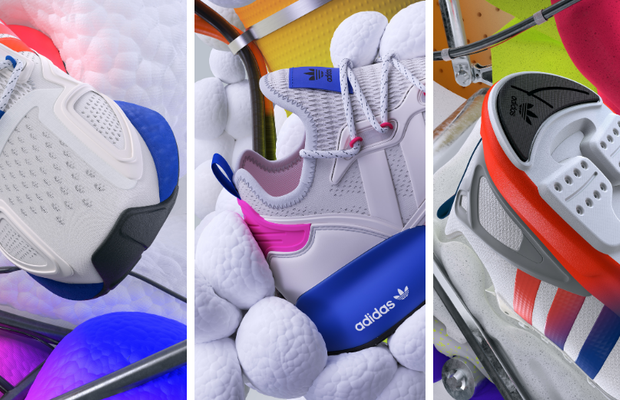 London-based creative production company Builders Club and New York-based advertising agency Johannes Leonardo are launching Adidas’ latest campaign for the ZX FW20 range.
Johannes Leonardo brought Builders Club on board for Adidas Originals’ latest campaign. The creative studio was tasked with creating worlds and animations that utilise the unique ZX product attributes. This campaign reintroduces the ZX to a new generation through the world of 'ZXience', where people can escape logic to study the oddly satisfying experience of the shoe.
Described as 'the mad scientist' of the Originals family, the ZX range is for a generation that traffics in the offbeat, absurd and viscerally strange. The new range of sneakers represents experimentation and further shows the surprising innovation behind the ZX range. The creative idea behind the campaign aims to match the technology behind the shoes and to satisfy the senses through new levels of squishiness. Wrapped in colours and gradients, these ZX sneakers look as good as they feel.
Builders Club created three 15” live action mixed media animations and three 15” CG animations, spreading across both lifestyle and CG. To bring the designs to life, the creative studio focused on the main qualities of the shoes, whilst pushing colour and design to a playful end. To accompany the six 15” films, Builders Club also created over 30 stills for the campaign.
Due to Covid restrictions on live shooting in the US, all the lifestyle stills and films were photographed and directed by Builders Club in London, whilst Johannes Leonardo and Adidas were connected remotely from New York.
Sophie Gunn, executive producer at Builders Club commented: “The schedule for the project was extremely tight, which made it challenging, especially considering the enormous amount of deliverables required for the campaign, however, despite the tight schedule, we were able to bring out the oddly satisfying feeling of the ZX technology, which was our main task. We took inspiration from the materials of the Boost and Flux shoes to create the fun and oddly satisfying worlds and so Boost balls, compression, jelly and liquid became our themes. We’re really excited with the final result and to have worked with Adidas once again.”