The 'kick-ass creatives' on humour, creativity, and the value of thinking inside the box 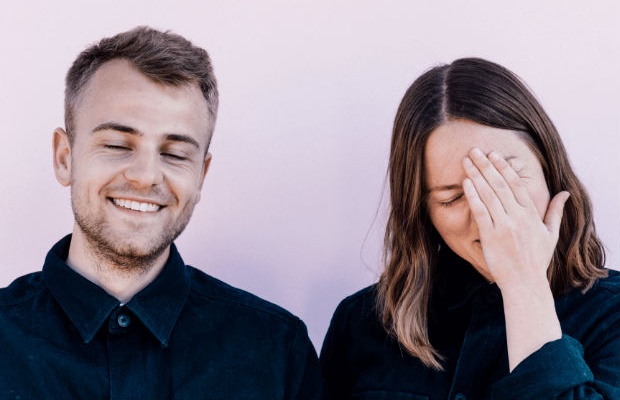 This year, young creative duo at adam&eveDDB, Jeppe Vidstrup and Simone Wärme have been named Most Promising Male and Female Newcomers at Creative Circle’s 2019 awards.
Labelling themselves as creative problem solvers, Jeppe and Simone’s mission statement is to become ‘the most kick-ass creatives’ they possibly can. With a long list of awards under their belts including Creative Circle’s President’s Award, the pair discuss thinking inside the box, who wins in an argument and why extinction rebellion are their dream client.
Q> How did you meet and how do both of your styles of work complement each other?
Simone> We met in ad school in Copenhagen and are actually quite similar in the way we work – both ‘half and half’ art director and copywriter. So you could argue that together we make one decent copywriter and one decent art director. Or that we don’t really fit into those boxes, which is why we usually just say we’re ‘creative problem solvers’.
Jeppe> We do compliment each other though. Simone is definitely the strategic one and I don’t make any sense half the time…
Q> How did you get into advertising? Were you creative kids?
S> We both sort of stumbled into it. I thought I was going to be a sociologist and Jeppe was en route to business school before he accidentally took a lucky u-turn.
J> Neither of us were particularly creative kids and I don’t think creativity is necessarily something that just develops either. I think it’s something you learn, just like math or any other skill. You teach your brain to think in a certain way; to entertain the logic of stupid thoughts. “Tide cleans clothes, so every clean piece of clothing is an ad for Tide”. It’s stupidly simple logic, but such a brilliant campaign.
Q> Comedy can be difficult to get right, but you use humour really well in your work – The National Lottery being a great example. Where does your sense of humour come from and how do you ensure this will resonate across different countries?
S> When humour becomes too calculated it stops being fun to write. And when it’s not fun to write, it often ends up very unfunny - at least for us. So we try not to think too much and just write something that makes us laugh... and then cross our fingers that other people will find it funny too.
The National Lottery - Instant Excitement
Q> How do you settle creative disagreements between you both?
S> We don’t, really. We’re both quite adamant. Usually there’s a reason we disagree, and it’s probably because there’s something wrong with that work in the first place, so we take one step back and try and fix that… Or one of us just caves in at some point.
Q> Which piece of work would you say that you are most proud of?
J> We once heard this story about when David Golding saw ‘The Long Wait’ for the first time, his reaction wasn’t “Fuck, that’s good” but “Fuck, what are we going to do next year?” We like that mentality, so we’ll say: we have a project for Adidas coming out soon – hopefully it will be that.
Q> How does it feel to win the Most Promising Male & Female Newcomer awards?
J> Great! But Nicklas Bendtner was also a very promising striker once. The pressure is on now. No one wants to be ‘most promising’ and then never heard of again.
McCain - Differences
Q> What are your top tips for thinking outside the box? How do you stay relevant with your ideas?
J> Good question. I think quite often the answer might be inside the box. You just need to use whatever’s in there differently to create something new. Someone clever once said that the problem is the solution, so we tend to stay close to the problem.
S> I usually look at anything but advertising - follow the news, read a tweet once in a while, go see an exhibition. Jeppe always stays very up to date on new campaigns too, but none of us worry too much about being trendy. We’d rather be smart, funny or surprising.
Q> Your work for Skittles and Pride was extremely creative, what is your process for coming up with your concepts?
S> Usually we try and attack a problem from an unexpected angle. Say something that’s never been said about the product before. Promote it in an unexpected place. Sell it to a totally different audience.
J> But Skittles was a bit different. We were essentially making a campaign to make people aware of an already existing campaign, so we kept the core thought really simple and had fun with the scenarios. For me it’s the slightly-off executions that make it work.
Skittles - Give The Rainbow
Q> Who would be your dream brands to collaborate with in future?
J> At one point, very very soon, everyone should make some shape of work for Extinction Rebellion.
S> What I would love to make more of, and what we try and consistently push for, is work that doesn’t behave like advertising. Our strength isn’t necessarily crafting a script, but coming up with unexpected solutions to problems – in whichever shape or form.
To enter Creative Circle 2020 awards, please visit, https://www.creativecircle.co.uk/#enter
Entry opening date: 1st November 2019