In his first campaign for the brand, Rafa stars in both Amstel ULTRA and Amstel 0.0 TVC’s, filmed from his home Island of Mallorca 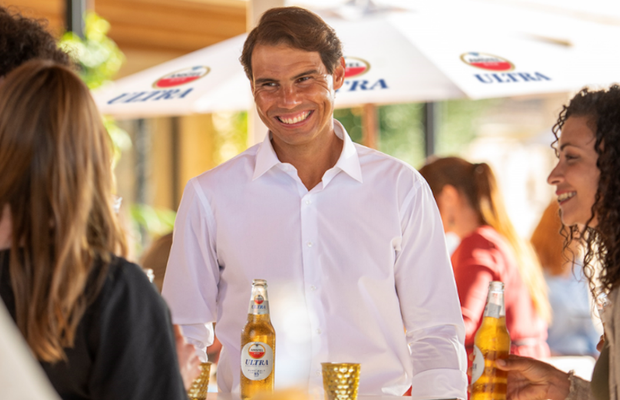 Today, Amstel ULTRA, the premium low-carb, low-calorie light beer, is launching a new global campaign with tennis legend, Rafa Nadal, titled ‘Choose Your Way to Live’.  The campaign highlights the importance of finding balance in life and the benefits of selecting a beer that works for you.

The ‘Choose Your Way to Live’ campaign shows Rafa embracing an active, but balanced lifestyle, enjoying the simpler moments with friends and family. The two hero films in the campaign - ‘True Luxuries’ with Amstel ULTRA and the ‘Rafa Side of Nadal’ for Amstel 0.0, show the unexpectedly understated ways Nadal likes to spend his time away from the court.

Launching first in Mexico and Spain, with an additional 10 markets following later in 2021, the campaign demonstrates how Amstel ULTRA and Amstel 0.0 are high quality, refreshing alternatives for those occasions where low calories or zero-alcohol beers are a great fit. The films illustrate Rafa’s choices to make the most out of every situation, such as enjoying the ‘nightlife’ with a late-night run or camping out with friends in '6* luxury' under the stars.

The ‘Choose Your Way to Live’  campaign also highlights the importance of moderation and responsible consumption as part of HEINEKEN’s wider Brewing a Better World ambition to create more choice for consumers within the zero-alcohol category.

Rafa Nadal said; "I really enjoyed working on this campaign with Amstel, as the message it portrays around encouraging responsible consumption is such an important one. Amstel ULTRA and Amstel 0.0 allow me to find a balance between staying active and spending quality time away from the court with friends, safe in the knowledge that I can make choices that complement my lifestyle and encourage responsible consumption and moderation. I hope it highlights that even the simplest choices in life, can help with finding the balance we all require.”

Bernardo Spielmann, Amstel global brand director at HEINEKEN said; “It’s great to launch our first campaign with Rafa Nadal, celebrating the luxury of choice and finding a beer that works for you and your lifestyle. With Amstel ULTRA and Amstel 0.0, we aim to empower everybody to be able to live a balanced and active lifestyle, without the need to compromise on taste or quality. Together with Rafa, we will continue to develop the Amstel ULTRA brand globally, as this exciting category continues to grow.”

The campaign was developed by the independent creative shop hello_ and the film was directed and produced by Igor Borghi of Central Films in Mallorca, Spain and followed local COVID-19 guidelines. Over the next three years, Nadal will feature in Amstel ULTRA and Amstel 0.0 TV spots, digital and out of home advertising.

This is the latest activity from the partnership announced in April, in which Rafa Nadal will be the face of a number of Amstel’s low & no alcohol beverages including Amstel ULTRA, Amstel 0.0. Amstel ULTRA Seltzer and Amstel Malta ULTRA.

Heineken Gives You Three More Reasons to Cheer in Campaign