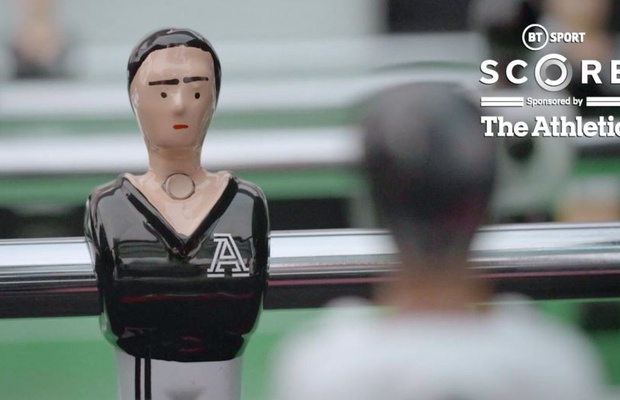 Debuting on BT Sport this past weekend, The Athletic have produced a series of idents for their sponsorship of the BT Sport Score results programme. The campaign created by Harbour Collective celebrates the brands unrivalled knowledge, tactical analysis and insight.

Throughout the Premier League ‘21/’22 season, The Athletic will be bringing to life their expertise by giving a voice to the most informed and ‘in the know’ characters: the players of the Athletic HQ’s football table.

Thibault Michal, creative director at Harbour, said: “The Athletic is unrivalled football journalism. BT Sports Score is a programme that brings you all the latest action as it happens. Put those together and you’ve got the perfect match to truly deliver football inside out for football fans in the UK.”

Sinead Bunting, marketing director UK, said: “The Athletic is known for offering unrivalled football insight and in-depth knowledge & BT Sport Score is known for its expert panellists. These great synergies come together in this campaign for football fans all over the UK.”

The sponsorship kicked off on BT Sport Score on Saturday 14th August and will run until the end of the Premier League season. Twelve idents, a combination of 15, 10 and 5-second spots, will run at first, with the potential for more to be developed throughout the season.

The campaign is the latest work from Harbour for The Athletic building on the recent multi-channel Euro 2021 campaign & the brands first TV campaign in the UK – “Every Source has a Source”.

Harbour Wins Match.com in UK as Part of a European Agency Pitch for Meetic/Match.com