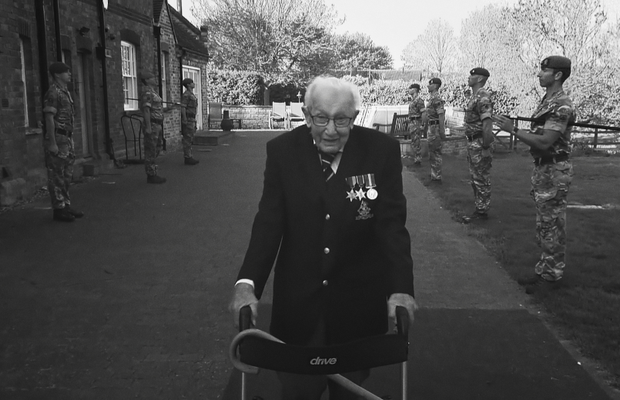 adam&eveDDB, Studio Republic and LiveWire Sport have been working on a pro bono basis with The Captain Tom Foundation to help launch a brand new fundraising initiative - the Captain Tom 100. The challenge, based around the number 100 is being organised by The Captain Tom Foundation with London Marathon Events to celebrate Captain Tom’s amazing achievements - his generosity of spirit, the hope and joy he brought to millions and his sense of fun. The Captain Tom 100 invites everyone to dream up a challenge based around the number 100 and complete it anytime and anywhere over Captain Tom’s birthday weekend (Friday 30th April to Bank Holiday Monday 3rd May) to raise vital funds for charity and deliver hope where it is needed most.

Along with producing the launch film, adam&eveDDB have supported the influencer and social strategy and social content production. Meanwhile, Studio Republic has created the brand identity, developed the central campaign website and produced an extensive suite of marketing assets for charities, businesses and schools to leverage in order to successfully engage fundraising communities. LiveWire Sport will execute the event’s social media and paid media strategy, channel management and real-time content production, while the Captain Tom Foundation’s social media agency, Battenhall, will continue to support the charity with ongoing social insights, strategy and content development.

One year on from when the late Captain Sir Tom Moore started his world-famous 100 laps around his garden, others are invited to celebrate Captain Tom’s life, by taking part in the new fundraising initiative - over what would have been his 101st birthday weekend.

Captain Tom 100 invites everyone to dream up a challenge based around the number 100 and complete it anytime and anywhere over Captain Tom’s birthday weekend  - between Friday 30th April to Bank Holiday Monday 3rd May - to raise funds in order to donate to The Captain Tom Foundation or a charity of their choice.

Once supporters have chosen their Captain Tom 100 challenge, they are invited to share their 100 on social media, using #CaptainTom100. Find out more here.

Captain Tom’s daughter, Hannah Ingram-Moore, said: “Captain Tom 100 feels like the perfect way to celebrate the hope and joy we know he inspired in so many. He would have loved the idea that everyone could get involved and that together we would ensure that ‘Tomorrow will be a good day’.”

Mat Goff, Joint CEO at adam&eveDDB, added: “We’re extremely proud to be working with the family to create The Captain Tom Foundation and to launch the Captain Tom 100, a fun and inclusive initiative that builds on Captain Tom’s legacy by raising money for good causes and hopefully lifting the spirits of the nation along the way.”

Charities across the board have been hugely impacted by the Covid-19 pandemic. It’s had a catastrophic effect, with the cancellation of thousands of fundraising events and the loss of an estimated £10 billion in income leading to charities unable to provide services at a time when vulnerable people need them most. Many charities are still in desperate need of financial support.

Captain Tom 100 is being organised by The Captain Tom Foundation with London Marathon Events and supported by adam&eveDDB, LiveWire Sport, Studio Republic and the Mass Participation Sports Organisers (MSO) (all working pro bono).