Epoch Films' Matthew Swanson on how he adapted to the pandemic as a director, his quest for specificity and a shoot that was almost cancelled due to an armed robbery 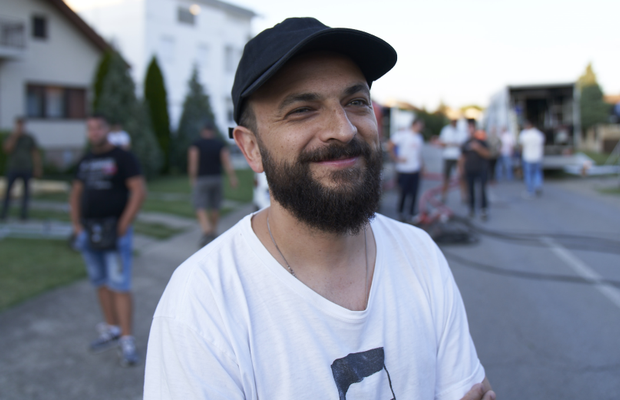 Matt Swanson was born and raised on the West Coast before moving east to attend film school in Montreal. After graduating, he wrote and directed his short 'Hiro', which went on to play at dozens of film festivals worldwide, winning a few awards along the way, including Best Short at SXSW. He began directing commercials shortly after that.

For me, good creative falls into two categories. The first is the good idea with potential — an original insight, great joke-writing, visual possibilities — whatever it is, it's good, and with the right execution it has the potential to be great. The second (rare) category is simply great creative — an idea so pure and simple and original and perfect that you wonder why no one has ever thought of it before, and you know the end result is going to be special.

The first category is where a lot of work lives, and where my job is to take something with potential and shape it in a way that makes it memorable. There are different degrees of this — I think particularly for directors just starting out, the goal is to really mine a script for its potential and turn even small opportunities into really worthwhile work. As for the second category, when you're lucky enough to have a script that qualifies, you do your best just to get out of its way and not fuck it up. Which can be challenging, as a director is often expected to plus or add ideas in the treatment stage, and sometimes that can actually hurt an idea that is already perfect.

If I like a script, what I've learned to do is sit down immediately and get into a bit of a note-making flow state. I find that if I don't start breaking it down right away a lot of my best ideas and strongest feelings become lost or watered down. So I sort of vomit all manner of thoughts and possibilities and references and ridiculous over-budget EP-nightmare alt ideas that I can possibly think of, and then I step away from it for a beat before really getting into it. Then it depends; sometimes I'll dig into research if I'm still trying to get a handle on tone, or sometimes I'll jump right into writing.

If the script is for a brand that you're not familiar with/don’t have a big affinity with or a market you're new to, how important is it for you to do research and understand that strategic and contextual side of the ad? If it’s important to you, how do you do it?

I'm of two minds about this kind of thing. Sometimes it's possible to know too much about the needs of a client or the specifics of a product or market, and that can sully your instincts or lead you towards cliché. Then again not knowing anything at all can create conflict down the road, which can lead to bad work. I'll go with a non-answer and say it's important to strike a balance.

I mean there are 30 different ways to answer this question and I think it really depends on the job. DP relationship is the obvious answer. Having a producer who really understands what you're trying to do and has your back every step of the way is right up there. But in this strange little corner of filmmaking we're in, having the right relationship with the right person agency-side can sometimes trump everything else. Trust is everything, and if you're working with a great creative in a mutual trust environment who has the power to sell ideas through, you'll make good work.

I guess I always just strive for specificity. That word can mean lots of things, but you know it when you see it. When work is specific that usually extends throughout, from casting to art direction to lensing and everything else. There's nothing wrong with broad, it's just not for me.

There's a lawyer in Vancouver with my exact name, and he clearly has some shadowy strategy company on retainer to maintain Google search dominance. Despite appearances, I don't know anything about real estate litigation.

While prepping a job in South America, our production office was stormed by armed gunmen. We were all put face-down on the floor while they robbed the place, which went on for 10 minutes but felt like about 10 hours. No one was hurt, fortunately. It was the day before the shoot, and the agency (who wasn't with us at the time) suggested we cancel and go home, but since I had had the foresight to pack a spare pair of pants, we went ahead and shot the job.

It always comes back to trust. On jobs where there is a lot of trust at every level, protecting the core concept is a much easier task. When a client trusts their agency, it allows the agency to do their job properly; when an agency trusts me, it lets me do what I do best, and always makes for better work. It's when there's a breakdown in trust somewhere along the way that the core idea can come under threat. To me, the best way to prevent that from happening is to place myself in situations where I know there is already a high level of trust, and then do everything in my power to nurture and maintain that trust.

I've been mentoring a director who I hope everyone will be hearing from very soon for the past year or so. I'm a big believer in mentorship as a way to help demystify this opaque job we do, which I hope will help diversify the talent pool. I find it much harder to just bring someone in for a day and be like, sit there and watch — I like the idea of it being a longer-term thing, where I work closely with one person for an extended period of time, which is what I'm doing. The person I'm working with has an advertising background — we stayed in touch after a job a couple of years back and it just sort of developed from there. Truth is, in comedy advertising, basically everyone looks like me. I have bid against a Black director a sum total of zero times, and a non-Black person of colour maybe three or four times, and that's fucking insane. There's no simple solution to this, other than for production companies to develop and invest in talent, and for agencies to hire that talent. Mentorship isn't going to solve everything, but it's a start.

I was really dead set against remote directing at the beginning of all this. I wasn't going to do it! Then an opportunity came up and, despite some bumps, I enjoyed it. I'd obviously rather be on the ground, but particularly if you're building sets and can really plan it all out beforehand, it can be quite seamless and even fun. The nice thing is that technology was forced to catch up with our situation, so remote tools have become easier to use and it's all possible in a way that it just wasn't before. That said, in terms of talent direction, the distance can create difficulties. It's much harder to berate an actor for not landing a joke over a Zoom feed.

It's been a bit of an adjustment period over the last few years but I feel like we've all got a good handle on the various deliverable needs each job seems to have these days. Still, I try to focus on the primary presentation format — I'd rather a campaign be seen in its best possible light as opposed to every format being a compromise, as long as the other deliverables still work. The most important thing here is communication, and the earlier that happens on a job the better. I can't tell you how many times we've all agreed to shoot with a widescreen aspect ratio, only to be given a last minute 9:16 deliverable request. There's only so much you can do!

Every new format presents new storytelling challenges, but as long as the joke lands, you're doing it right.

I feel like every comedy director says "but I can also do x!" We are the most persecuted and pigeonholed category of director. You should all feel very sorry for us. I had a classic case of "but I can also do x" syndrome early on, so I went after work that would expand my horizons a little, and I like that my work isn't just straight-up absurdist comedy performance anymore. That said, comedy performance is to me what James Woods is to Sharon Stone in Casino — I just can't stay away for long.