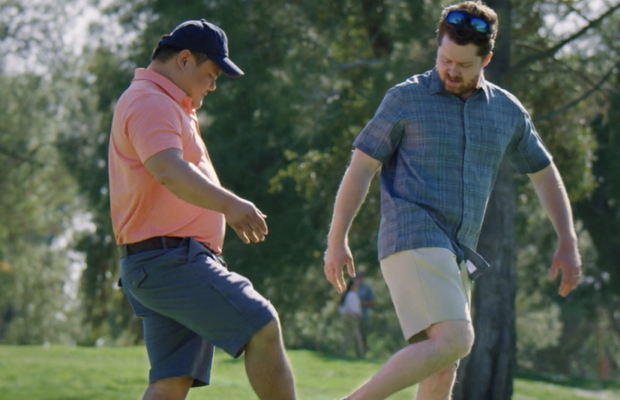 The Distillery Project has created a pair of spots for client Meijer that navigate the confusing period between the height of Covid and our collective recovery.

In one, a pair of old buddies are overjoyed to meet up at the tournament - there’s cause to celebrate because they haven’t seen each other in more than a year. They begin to embrace, then pull back, and go through a series of awkward almost-greeting gestures like fist bumps, elbow taps, a game of footsie, and even a salute as they try to negotiate the New Normal. They are totally befuddled and completely out of practice.

“It’s OK if we’re all a little rusty,” the narrator says. “Get out for good and help feed our neighbors in need.” The screen reads Meijer LPGA Classic for Simply Give and includes a URL to buy tickets.

In another, a golfer is concentrating on getting the ball in the hole. Just as she is about to tap in, an observer shouts, “Yes!” and she’s certain this has ruined her shot. However, it may have saved it—the ball rolls in the hole. “We’re all a little excited,” the narrator says, and the golfer bonds with the overzealous fan.

“The Meijer LPGA Classic is always a signature event in the Grand Rapids summer, as Meijer brings together some of the very best golfers in the world, along with the local community, to help Meijer’s Simply Give program combat food insecurity throughout the Midwest,” added The Distillery Project’s CCO, John Condon. “This year, the event was doubly significant as it marked one of the very first times the community could come together for any reason. It really is an opportunity to get out for good.”

The LPGA work ran in six states as well as nationally on the LPGA golf channel.

More from The Distillery Project

Toyota Kicks Off the Holiday Season with a Message of Togetherness