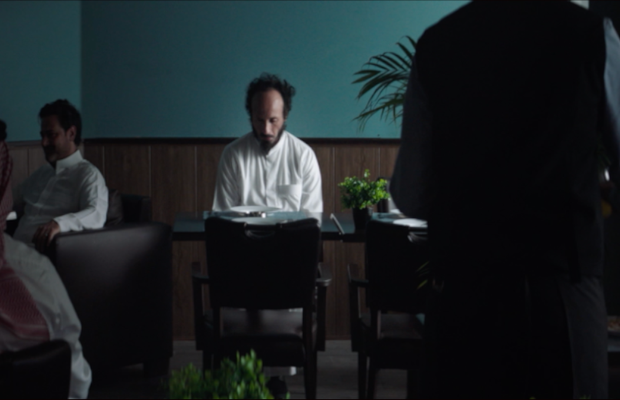 Emirates NBD is a leading bank in the UAE. But it is a relatively new bank in Saudi Arabia. Saudi Arabia’s advertising landscape, particularly for films, is full of generic credit card offers, from banks and financial institutions, that flood the market. Emirates NBD was launching its new cashback credit card called ‘Mazeed’ in Saudi Arabia. Emirates NBD needed to do something banks don’t do to stand out and earn attention and awareness, and drive acquisitions. We had to flip the typical archetype and show a world without the cashback card through the fictional story. By doing something other banks didn't do in terms of the idea and in terms of the craft of the film, we enabled Emirates NBD to stand out and earn attention.

We created a fictional character in Saudi Arabia to break through the credit card advertising clutter. He’s a peculiar yet well-meaning man in a cold and thankless world that ignores him; symbolically representing life… and banks. The film’s cold look aims to embody his world’s reality. In the most “un-Saudi” banking film, we go through his life in yet another day, observing the many instances when he, generously, gives something to someone else... Helping hold the elevator door open for an elderly woman. Doing the midnight shift to help his boss with urgent work that the latter needed. Stopping on the highway back home to feed a lost goat. Cooking pasta (albeit an absolutely bland one) for his wife. Putting money into a vending machine to get a snack, as he wanders alone at the mall. Across all those instances, we see him get nothing back. Until one transformational moment…

The goal for this film was to disrupt the ad clutter, visually and conceptually. Firstly, it needed look different from other banking films and other Saudi films that typically look colourful and bright. It was designed to feel colder and grimmer to bring to life how our fictional character felt in his life, when he got nothing back (and thus, serve as a metaphor for how people feel when they get nothing back from banks). Secondly, it needed to feel real and relatable versus being overtly produced and feeling like another commercial. Thirdly, the lead actor needed to typify the peculiar yet well-meaning and generous man we wanted as our protagonist. And fourthly, the story needed to make people feel for him in every instance, and almost feel aghast at the other seemingly harmless people around him who never gave even a thank you in return (not even the goat!).

The casting process spanned Saudi Arabia, Egypt, UAE and Lebanon. After auditioning over 43 actors, we found the perfect one. BUT, being Lebanese (blue eyes, light brown hair), he didn’t look like a Saudi. So, we got a beard designed, defined a peculiar hair style and hair colour, and adorned him with black contact lenses. He was chosen because: He could typify a man struggling to get recognition for his little acts of goodness towards others, in his everyday existence. In each set-piece we could see him fumbling through awkward situations, experiencing thanklessness in every scene. He could look scathed, affected and downbeat. And the fact that he never spoke, his look would add to the sympathy he’d evoke in people. Also, he displayed qualities that would place him in opposition to the contemporary masculine ideal in Saudi Arabia; he’d invert the traits Saudi society accepts as necessary prerequisites for a certain type of masculine identity.