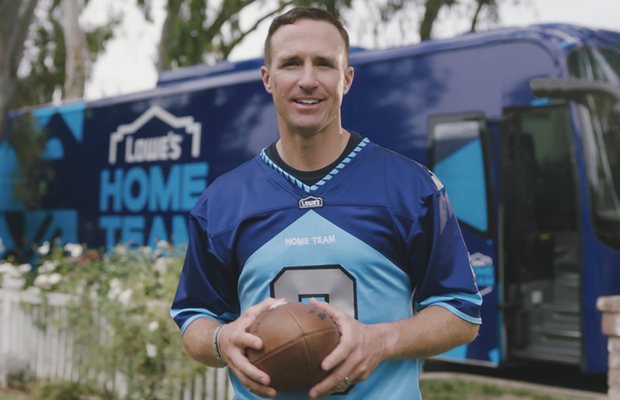 For the second consecutive year, Lowe’s has teamed up with the NFL for 'Lowe’s Home Team', a campaign created in collaboration with creative agency Deutsch LA. An extension of the campaign from 2020, this is the first year Lowe’s is recruiting fans everywhere to join their team.

The anthem spot for the campaign, 'New Team', features former New Orleans Saints quarterback Drew Brees, fresh out of retirement, serving as the general manager of a new team in the NFL: Lowe’s Home Team. He’s on a mission to establish a team that plays for home, enlisting the help of 12 NFL players, 300,000 Lowe’s Red Vest Associates and YOU.

As with any team, there is a ‘tryout’ process: fans can compete in various at-home DIY challenges titled, '4 Quarter Challenges' for a chance to make a spot on the team. The '4 Quarter Challenges' will be showcased via social media and take place throughout the NFL season, broken into four distinct quarters from September through December. Each quarter will be a different DIY challenge, and fans will submit a photo or video of their ‘tryout’ on Lowes.com/hometeam.

Fans who make the team will receive a custom Lowe’s Home Team Jersey and a chance to win the grand prize of a trip to Super Bowl LVI.

Lowe’s Home Team plays for progress, and is dedicated to empowering people everywhere to come together through DIY to make homes better for all.