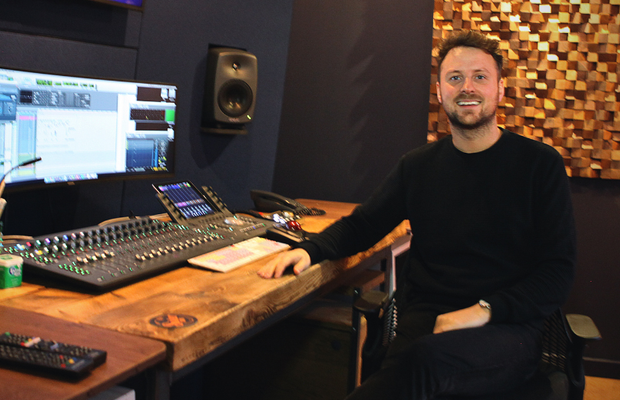 Sean Mahoney’s journey into the industry started with a childhood fascination with electric guitars, leading him to become a self-taught musician and join a band. With Brother, he toured the world, supported Morrissey, and played Glastonbury's Other Stage as well as Jimmy Kimmel and Letterman.
Now, as a sound designer of over five years at Soho’s Jungle Studios, Sean uses his background as a musician to help him craft sound for global brands including Virgin, Asda and Peloton.
In this interview, LBB gets to know the talented musician-turned-sound designer to find out what inspires him and how his relationship with sound has developed over the years.

LBB> What’s your typical starting point when you’re working on a new project? How do you break it down and generate your ideas?

Sean Mahoney> So I usually try to break the project down and decide how best to go about what we are trying to achieve, that way I know how long I can spend on certain things. I like to discuss what I have in mind with the team as a lot of the time they have a vision of how they’d like the sound to be. If I had it my way, I would spend forever on one sound in terms of experimenting and perfecting it. So I like to map out how much time I'm able to dedicate on each part of the spot to keep myself on track.

LBB> Music and sound are in some ways the most collaborative and interactive forms of creativity. Do you prefer to work solo or with a team?

Sean> I definitely feel like I work best when I'm communicating with other people to bounce ideas around. The creative process can be very dependent on the energy in a room, and sometimes you need to go through some bad sounds to get to the good ones, or put a load of bad sounds together to make a good sound. So it’s useful to be left alone sometimes to experiment and delve through that without other people listening.
You’ve got to be careful of showing people things too early because it might not be ready, and then you run the risk of them jumping in telling you it's not sounding right before you've managed to get it to where you want it.

LBB> What are some of your most memorable professional collaborations?

Sean> I worked on the Cristiano Ronaldo Free Fire spot with our creative director Ben Leeves, which was a really fun project for me as I’m a huge football fan. Ben was throwing things at me that I hadn't even considered and just encouraging me to go above and beyond with certain sounds that aren't necessarily there in the shot but could enhance the spot. He’s brilliant, and I always learn so much when working alongside him.

LBB> What would you say is the most satisfying part of your job and why?

Sean> What I do is really really fun. I'm very lucky to have this job and it doesn't get boring because you can constantly get better and you're constantly able to learn, no two days are the same. I love working with different people with different disciplines and coming together to make this one thing with a common goal in mind.

LBB> Who are your musical or audio heroes?

Sean> I love the ambient soundscapes of Brian Eno. His work really blows me away. In the film music world, it’s got to be Hans Zimmer who is just incredible - you'll hear his music and know it’s his. Even just hearing him talk about music and sound is so inspiring. In terms of sound design I love Mark Mangini’s work, his passion and the way he talks about sound design is amazing.

Sean> I find that sound design and music are intertwined a lot more. You'll find a lot of sound designers have got a background in music, because the two worlds coexist, especially now. It's really handy having a musical background and being able to pick up on things like rhythm.
I think sound is still quite underestimated in terms of how important it is though. I find that consumers underestimate and are surprised by the amount of work that goes into sound design. For instance, a lot of people spend money on high quality televisions, but not a lot invest in surround systems. Without the right equipment to hear the complexity of the sound and how it elevates the picture, you can miss out on a lot.

LBB> When you’re working on something that isn’t directly sound design, are you the sort of person who needs music and noise in the background or do you prefer silence?

LBB> Do you have a collection of music/sounds and what shape does it take?

Sean> I've got a vinyl player and I like to build my collection with songs and albums that have really stood out to me. I’ve got a lot of Joni Mitchell and Bob Dylan. There's something about the process of physically getting the vinyl out and putting it on the player - it’s intentional listening.

LBB> What are the most inspiring experiences you’ve had when it comes to sound and music on your travels?

Sean> As a sound designer, you do find yourself listening out for things more than other people do as it’s the nature of the job. I remember walking down the beach in Barbados on holiday and loving the sound of the calm lapping waves - so I got my phone out to record that.

LBB> If you were sent on a trip with the sole purpose of collecting sound, where would you choose to go?

Sean> That’s a tricky one! My favourite sound is the noise of old computer keyboards - I love that clunky sound. Those really sturdy, analogue machinery sounds that we don't really have so much of any more. So maybe I’d have to travel back in time. I also love a good overexaggerated cigarette drag where it’s stupidly loud.

LBB> How has your relationship with sound and music changed over the years?

Sean> When you're young, you tend to get set into one genre and what you consider as cool, I was certainly quite particular with what I would listen to. As I’ve gotten older, I'm open to any sort of music. There's so much to learn from different genres and you limit yourself by just just sticking to one. To me now, there's two types of music, good and bad. It doesn't matter what genre.
And that goes for films too. I’ll watch a film because I know the sound design is going to be great, and not necessarily because I'll enjoy the storyline.

Lighting Audio Fires Within the Hearts of Students

Behind the Work: Bringing ŠKODA’s Robot Brothers To Life