Produced by Shutterstock Studios and RSA Films, the new campaign inspires creatives to imagine what they can create with Shutterstock’s assets 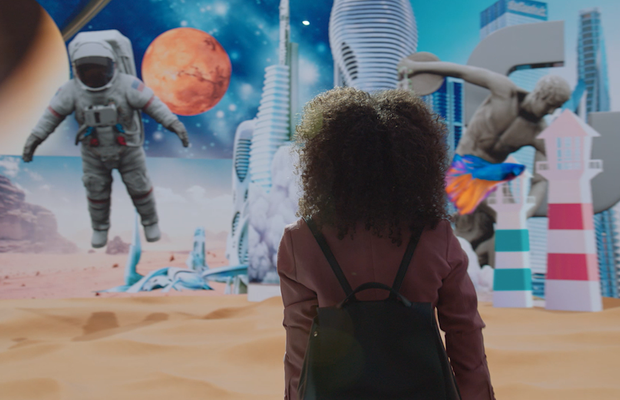 Shutterstock today announced the launch of its new brand campaign and TV commercial, 100% Shutterstock. Created solely with Shutterstock content, the TV campaign showcases the creative platform’s ability to fuel and unleash creative potential from inspiration to the finished product. The TVC, co-produced by Shutterstock Studios and the Ridley Scott Creative Group’s RSA Films, asks creatives, “What can you create with 100% Shutterstock?”

The demand for creative solutions and content has risen dramatically since the start of the pandemic, which has driven a need for more cost-efficient and flexible services to cater for remote working conditions and budget restrictions. Despite widespread access to tools and assets for creatives, there is a lack of a cohesive workflow and therefore, creators are required to constantly jump between resources. 100% Shutterstock enables creators to overcome this challenge by starting and ending their entire process on one platform, while keeping full flexibility on the creative concept. The campaign aims to expand people’s breadth and perception of Shutterstock’s entire offering, showcasing the company’s shift in positioning from its inception as a stock image house, to an intelligent creative platform.

“There is no better way to tell your clients what you can do, than by showing them. Our new commercial demonstrates the limitless creative possibilities you can achieve with 100% Shutterstock,” said Rion Swartz, VP of brand marketing at Shutterstock. “Shutterstock is redefining what creativity means and how content creation happens. 100% Shutterstock is an important moment for the brand as we prove ourselves to be a cutting-edge creative partner for individuals and businesses of all sizes. We aim to expand the perception of what creators can do with our amazing catalog of assets, and highlight our services that can turn your ideas into achievements. Our commercial is about celebrating all the resources available on one platform - from Editorial and custom content through our Studios offering, to video, music, and 3D rendering, that are, of course, 100% Shutterstock.”

Aimed at all creators, from individuals to global enterprises, the campaign hopes to inspire people to think big. The TVC was co-produced by Shutterstock Studios, an end-to-end custom creative service launched in November 2020 that provides global production services, data-driven content strategy, brand storytelling and amplification for today's most influential brands and agencies.

Additionally, Shutterstock’s creative platform has been strengthened with recent acquisitions of leading online graphic design and image editing platform, PicMonkey; AI music company, Amper Music; 3D content marketplace, TurboSquid; and the formation of its new AI division, Shutterstock.ai, and production company Shutterstock Studios. As a result, the platform has simplified the creative process by bringing together the widest variety of fresh and relevant content and applications to allow creators to create, all in one place.

“Following a fantastic year for Shutterstock Studios, having produced TVCs, branded entertainment, social and digital content for some of the world’s biggest brands, media companies and agencies, it was an incredibly creative and inspiring experience to produce our own Shutterstock campaign,” said Aiden Darné, head of global production at Shutterstock Studios. “To be given the keys to our expansive library of assets and produce a TV spot made entirely from Shutterstock content was one of those rare opportunities to combine a great creative brief with innovative technology that made perfect sense. XR is a game changer for filmmakers, and I think that so far, it hasn’t been used that much for commercial content. Creating our Shutterstock world wouldn’t have been possible without that type of technology. Or at least, it wouldn’t have been nearly as effective.”

“We leveraged visuals from every area of the Shutterstock business for this campaign, and it was a compelling reminder of just how versatile and far reaching our offering is for our customers globally.”

The 100% Shutterstock video campaign will run between September 13 and December 12, 2021. Planned and executed in partnership with Horizon Media, viewers will see it on 19 top tier and niche cable networks in the US, across connected-TV platforms like Hulu, Roku, and Amazon Fire TV,  along with a variety of digital, social, and owned outlets like YouTube, Facebook, and Instagram viewable across multiple devices.