This Tourism Campaign Hijacks the Derogatory Phrase 'Go Back to Africa' 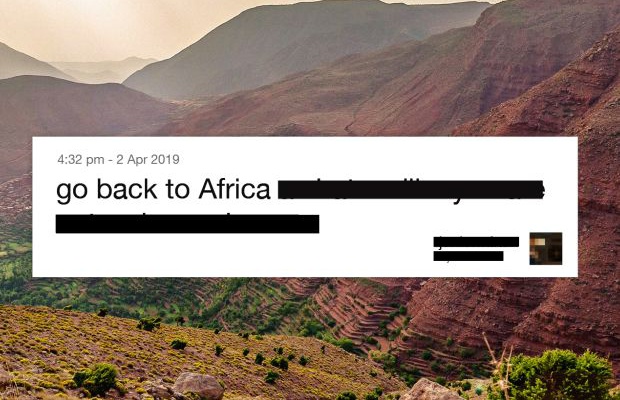 Black & Abroad, a multi-platform travel & lifestyle company dedicated to redefining world experiences for the modern Black traveller, hijacks the racialised and derogatory phrase 'Go back to Africa' (#GoBackToAfrica) for a pan-African tourism campaign. By blacking out hate-fuelled Twitter posts and re-framing them against words and images showing the beauty and diversity of all African countries, the brand is putting a positive and uplifting spin on a negative and disparaging narrative.
“One of the campaign’s goals is to effectively strip the perceived power away from those who use the phrase ‘Go back to Africa’ with derogatory intent,” says Eric Martin, co-founder of Black & Abroad. “If we can strip the expression of its impact, then we can debunk the age-old narrative that Africa is a desolate, disease-ridden wasteland undeserving of our time and travels.”
The phrase 'Go back to Africa' has a long, complicated history, and unfortunately,  today, it is still widely used in racialised contexts online and beyond. According to NetBase’s social listening platform, the phrase is used over 4500 times a month online.

Black & Abroad partnered with data-driven creative agency FCB/SIX to bring this campaign to life. Through a series of paid ads on Twitter, YouTube and digital OOH, Black & Abroad is capturing that hate as it happens, redacting the context, then turning it into a positive tourism message – brought to life through user generated photos harvested from social media using a powerful AI platform.
With messaging speaking to each of Africa’s 54 countries, every ad in the campaign builds equity behind the hashtag #GoBackToAfrica while driving to a new website at GoBacktoAfrica.com.
“We’re interested in showing a more diverse picture of Africa than you see in traditional tourism campaigns,” says Martin. “Yes, there are zebras in Africa, and zebras are great. But there are also amazing art galleries, and restaurants, and beaches, and other experiences, many of which may be more relevant to African American tourists than some other groups.”

To create the campaign, FCB/SIX partnered with IPG’s Initiative Media to help identify and reach African Americans who are interested in travel. It highlights each one of Africa’s 54 countries then invites them to “See themselves there” by clicking through to GoBackToAfrica.com. Designed as a counterpoint to the travel industry’s bias toward Caucasian travellers, the site features all African countries, and real social photos of African Americans travelling there.
“Do a quick Google image or stock image search of the word ‘travel’ and you’ll immediately see how biased the industry is toward Caucasians,” says Ian Mackenzie, executive director of FCB/SIX. “GoBackToAfrica.com is a place where African American travellers can see themselves represented with positive images set in each one of Africa’s 54 countries.”

At the heart of the project is an innovative digital platform designed to locate, quality control and gain permissions to use aspirational images of African Americans travelling in Africa. The platform, fuelled by Google Vision and crafted by FCB/SIX, is an AI-powered content marketing engine purpose-built for the travel and tourism industry. The platform looks for images and ingests thousands of pieces of user generated visual content from Twitter, Facebook, and Instagram, then uses Google Vision’s image recognition technology to filter through content by location, subject, quality, and relevancy – all in real-time. Once curated and customised into campaign materials, the agency uses the platform to push the content out through Black & Abroad’s social channels and website.
The ultimate goal is for this campaign to break down barriers and encourage conversation among Black travellers around what it means to ‘Go back to Africa.’ Through targeted efforts to effectively showcase the essence of each African country, the campaign aims to spark a movement dedicated to eroding the negative perceptions of the continent with the high volume of content it creates purposefully designed to displace and bury hateful content that exists online.