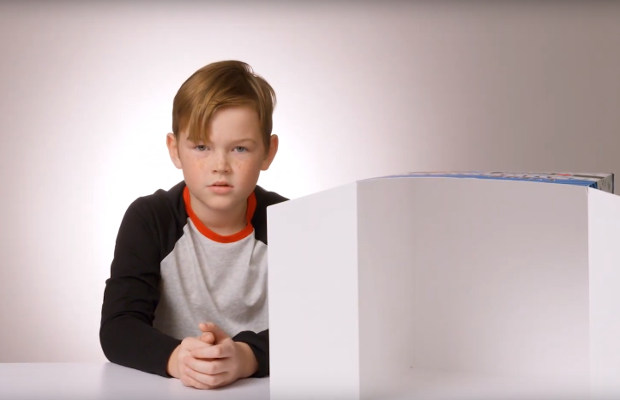 As another holiday shopping season kicks into high gear, there’s no shortage of tech, toys, and treats being touted as the latest and greatest ‘must-have’ gift. And one of the most popular ways new products are being showcased to consumers is through unboxing videos, where people film themselves opening, inspecting, and reviewing an item for their audience. This trend has exploded over the past few years, and has made its way into the children’s toy category, where content creators young and old unbox and discuss the latest toy.
But while most of us know the thrill of opening a gift and exploring what’s inside, others aren’t so lucky. Thousands of Canadian kids don’t receive gifts during the holiday season as their families don’t have the means to buy them one. In an effort to raise awareness for this harsh reality, Toys For Tots Canada created an unboxing video of their own – an #UnboxingWorthWatching. The video starts with all the common tropes you’d expect in an unboxing video: jump cuts, a homemade title card introducing their host Joey, even a callout to subscribe to his YouTube channel Everything is happy and upbeat until, it isn’t. When Joey opens the box, he finds there’s nothing inside, and the campaign message is revealed: Some kids have nothing to unbox.
“We’re always looking for new ways to express the reality for these kids, but it’s difficult to show people the absence of something,” says Robert Krizanec, president of Toys For Tots Canada. “By leveraging the unboxing trend we’re spreading our message to a new audience in a new media space, and creating more awareness for the charity and our efforts.”
To further promote their campaign message, Toys For Tots Canada rallied the YouTube community and will be getting some of its most popular unboxing personalities to create a video where they open an empty box in an act of solidarity in the coming weeks. So far YouTube stars Jacques Slade and Brianna Barnhart-Arsement have joined the campaign, and the charity is hoping even more YouTubers will join in as well. (You can check out Jacques’ channel here, and Brianna’s channel here.)
The #UnboxingWorthWatching project was conceived by advertising agency Wunderman Thompson Canada, and brought to life in collaboration with Morrison Films and Berkeley Music. All parties worked on this project as a pro bono labour of love.
“As soon as we described the idea to people and told them it was for Toys For Tots Canada, people jumped in and offered their help,” says Mike Albrecht, senior copywriter at Wunderman Thompson. “This charity does so much for kids during the holidays, which is such a special time at a young age. To have the chance to help give more kids a happy holiday was an amazing opportunity for the whole team.”

Behind the Work: Tetley Promotes ‘Diversitea’ Amongst Brew Drinkers