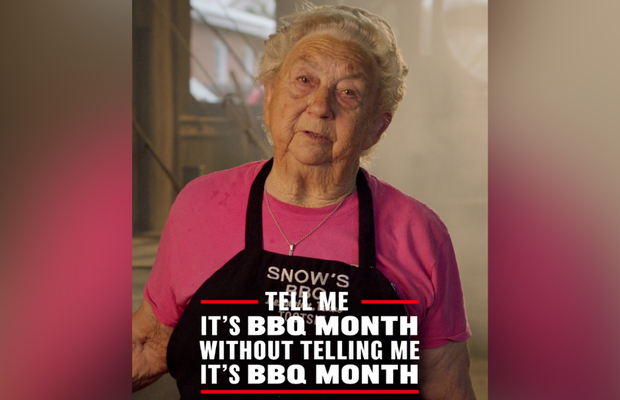 Every month is BBQ month in Texas, but for 'official' National BBQ Month this May, Austin creative agency Proof is helping Travel Texas (the tourism office for the state of Texas) stake its claim on BBQ culture as more and more people move to make post-pandemic travel plans.

With the launch of an integrated social and digital campaign coined 'It’s Not May. It’s BBQ Month', Travel Texas is shining a light on Texas BBQ culture to entice people to experience the state in a new, exciting way while also showcasing the local BBQ joints that make the Texas experience so unique and memorable.

The campaign unfolds across multiple social and digital platforms. Proof is bringing Travel Texas to TikTok for the first time for two initiatives. The first is a video series called 'Pitmaster Ponderings', which features a host of renowned Texas Pitmasters like Tootsie Tomanetz, a woman in her mid-80s who is a fixture at Snow’s BBQ and was recently featured in the Netflix series 'BBQ Across America', and Brian Mays, owner and Pitmaster of Sam’s Bar-b-Que in Austin. (The series will also run on Facebook and Instagram Stories throughout May) The second is a series of TikTok videos paying homage to beloved memes on the platform, such as before and after videos of a naked raw brisket and a dressed cooked brisket and “Tell me it’s BBQ month without telling me it’s BBQ month” videos.

Meanwhile, through a licensed partnership with Texas Monthly, Travel Texas and Proof are releasing a “Texas BBQ Month Cookbook” to provide recipes and practical tips for making your own BBQ creations at home. Featured recipes will run on rotation across Facebook, Instagram and Pinterest throughout May, and the full cookbook will live on Travel Texas’s website. Recipes include brisket (smoked on a Weber grill), thin BBQ sauce for smoked meats, smoked turkey legs, and Texas-style potato salad.

The campaign also includes rich-media executions on digital where consumers can “slice” a brisket, as well as high-impact digital display ads across websites targeting people who consume BBQ and food content.

Finally, Travel Texas is debuting new website content, including an interactive map of the Top 50 BBQ joints in Texas. (Standouts include Franklin’s BBQ of Austin, Truth BBQ of Brenham, Snow’s BBQ of Lexington, Bodacious BBQ of Longview, and a handful of up and comers throughout the state.)