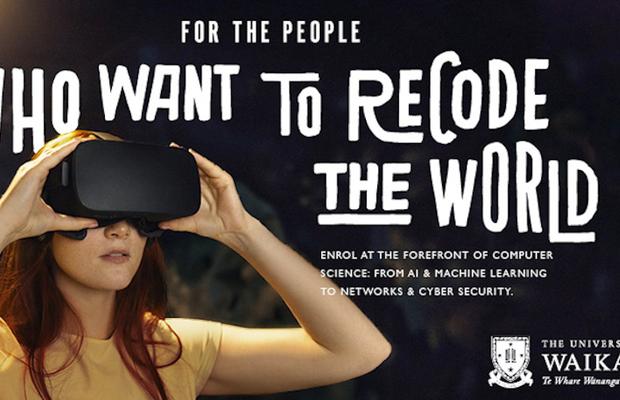 The University of Waikato has just launched a new advertising campaign for student recruitment, highlighting the institution as a welcoming and friendly university of national and international standing, with a wide range of quality programmes on offer.

Drawing on the University’s motto ‘Ko Te Tangata’, translated as ‘For the People’, the campaign showcases the warm, supportive culture at the University which places students at its heart.

University of Waikato vice-chancellor, professor Neil Quigley, says the campaign is a bold, new direction highlighting attributes of the University and the wider Waikato and Bay of Plenty regions that are widely known locally, and which set it apart from others: “This is a new direction for the University, designed to stand out in an already crowded market, and raise our presence nationally.

“The campaign reflects the compelling proposition provided by the University of Waikato given our strong academic programmes and leaders, welcoming learning environment and the appealing lifestyle offered by studying in Hamilton or Tauranga.”

The competitive pitch for the campaign was won by advertising agencies Special Group for the creative and Together for media strategy, buying and analytics.

Says Professor Quigley: “Both agencies have significant education experience, and both provided the freshness and boldness of approach that we were looking for.”

Says Kris Hadley, managing partner, Together: “We’re stoked to have been selected to help the University identify and attract quality candidates. With competition for candidates red hot, we’re looking forward to unlocking the power of their data and collaborating with Special to create attention-worthy moments.”

Says Tony Bradbourne, CEO/CCO, Special Group: “‘For the People’ is a simple, truthful brand platform that goes to the heart of what makes the University of Waikato so unique.

“You really feel it when you walk around their incredible campus. It’s a consistent brand positioning that can anchor every piece of work the University of Waikato does for years to come.”

The first two creative concepts went live yesterday, featuring the University’s environmental and computer science degrees. The rest of the campaign will roll out over the coming weeks.

The campaign will be highly visible in the University’s home regions of Waikato and Bay of Plenty, with additional focus in Auckland and the wider North Island.

Specific creative executions have been developed to appeal to the Auckland market, highlighting the compelling lifestyle reasons for students to make the move to Waikato: ‘escape the concrete jungle’ with a ‘home-cooked meal only 90 minutes away’.

The campaign will feature on billboards and posters, in print, on radio, and across digital platforms.