Uprising: On the Verge of a Second Renaissance with Pedro Villegas

M&C Saatchi Chilanga’s creative director speaks with LBB’s Ben Conway about being a “colourful observer”, talent being wasted through fear and creating an impact through passion 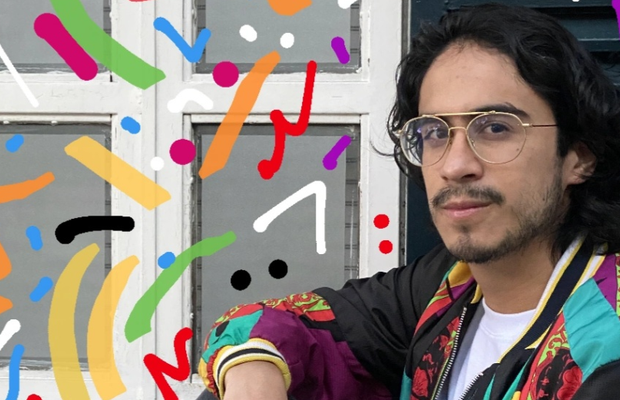 The world was Pedro’s playground growing up - playing and inventing games with his friends, creating “fragrances” from the plants that grew in his grandparents’ garden and generally using his imagination. His hobbies included sports and reading stories, as well as more creative endeavours that hinted at his future vocation. That inventiveness was greatly encouraged “thanks to the relentless effort from my mom to cultivate culture and creativity into me.”

Pedro considers himself lucky to have grown up in three different cities spanning Mexico and the US. He says, “That’s one of the things I think impacts me the most and that I really value.” Spending time primarily in Mexico City, the creative director also lived in Washington DC and Boston as a child and feels a bond with each of the cities that gave him ‘memorable experiences and learnings’ that he carries with him to this day. “I am a bit of all of them,” he says. Pedro believes that the American lifestyle and culture of those cities, combined with his Mexican cultural heritage and creative family, made him the person that he is today. “I met the lows and highs of each of those worlds and that gave me an interesting, mixed cultural background that I am proud of. It helps me observe the world around me under what I think is a unique vision.”

Thanks to his multicultural upbringing, Pedro describes himself as a ‘colourful observer’ - an adaptable person that can fit into any social context. He says, “Each colour that exists shows a personality, so I like to think of myself as a colourful person.”

Two and a half years into studying Industrial Administration at university in Mexico, Pedro came to a realisation that he had strayed from his creative path and it was not bringing him any joy. “I had an honest conversation with myself and realised that telling stories, writing, and selling is what I’ve always been good at and loved.” Since experiencing this change of heart, whilst on a beach trip, he has found his dream career in the world of advertising. Pedro’s passion for this industry is derived from the friends and mentors that he has met along the way that have presented many opportunities for all aspects of his life. He says, “Passion is what makes the work different, and you must do a lot of things by yourself so they can happen.”

Starting out in advertising, Pedro began his new vocation as an intern at a boutique PR firm. The experience he gained here would provide him with the foundations and basic know-how of the advertising sphere, as well as introducing him to the real world of work after leaving education. “Since I realised I liked what advertising was like, I’ve never looked back.” His first professional project involved writing copy on a campaign for a Mexican movie where, despite having a few initial growing pains, he caught a glimpse of what his new career could offer him in terms of personal fulfilment. “I remember the night before launch… leaving the office with a unique feeling of accomplishment inside me. For the first time in my career, I really felt that I had done meaningful work,” Pedro says. “The gamble of leaving my first career had paid off. I’ve chased that feeling ever since. It was so, so pure and special.”

Where he truly began to feel the tide of his career turn was when working on a campaign for Clorets during the 2018 World Cup. The campaign allowed him to combine his love for football with an opportunity to acknowledge his Mexican heritage and inspire the national team using the country’s stories of resilience - all in a ‘joyful experience’ that helped put his name on the map for the first time.

Now living in Mexico City, Pedro found the pandemic a difficult but valuable experience. “I’m sure that as time passes on, we’ll look back to this feeling grateful for all the learnings it brought.” Somewhat ironically, Pedro feels that he really began to hone his craft during the pandemic, which saw productivity for many grind to a halt. The shift between working in an office and working from home was an important learning experience for the creative director, which eventually resulted in him learning a lot about himself as a creative. Suddenly being more isolated and independent, Pedro found that he had more responsibilities and challenges that needed to be adapted to. “Everyone was in the same situation, adapting, stressed, so it was basically your job to find a way,” he says. “It was really hard at the time, but I think that all the challenges I faced made me push myself harder and eventually bloom in the middle of uncertainty. I look back on that period with pride.”

Whilst he loves to create and collaborate with talent across disciplines - still as excited as ever to see good work that ‘reminds him why he does this’ - Pedro also has his challenges. Always ambitious, but sometimes too idealistic, he says that he aims to ‘change the world for the better’ through his work. Although he admits that he can often expect too much from himself in a professional capacity. “That can be difficult sometimes because it leads me to overthink and be temperamental at times.” This creative ambition is something that can overflow into the creative’s personal life, exemplified by the recent campaign he created for a friend’s wedding, including a concept, visual identity, shirts and digital assets. Despite coming from different backgrounds and being separated throughout the pandemic, he feels that the ‘campaign’ was a success. “It was a good touch that I think brought us all together like the old times.”

When he’s not continuing his work into his leisure time, Pedro decompresses with sports, art, videogames and parties. He describes his friends as “insights and concepts geniuses, even if they don’t know it” that provides a perfect combination of socialising and inspiration. For Pedro, people-watching is always a  source of inspiration. The subsequent stories, possibilities and influences for creation and new experiences are what fuels Pedro’s passion. These influences are also derived from the media that he consumes, citing Vince Gilligan, Curiot, Wes Anderson and Keith Haring as sources. “I especially enjoy things that leave me thinking. That can be anything, even a Tiktok… Those names came to mind because their work always makes me feel something.” Although he admires Dave Trott, David Droga and Anselmo Ramos among others, for inspiration from within the Mexican industry, Pedro looks to Eduardo Salles, founder of Pictoline. “He is the perfect role model because he broke the pattern. He found a way to stay in the creative industry, making a positive impact in the world and do what he loves, but without all the bad or frustrating stuff from the advertising industry.” Similarly, a project that has arisen from his compelling Mexico City surroundings is his collection of stories ‘Tales from the Treehouse’ - a work in progress that will explore his balcony’s view of the city.

Pedro says that there is a younger generation of creatives who are eager to evolve the industry through digital transformation. Though according to him, there’s a level of reluctance from the more experienced members of the industry – and when this conflict of opinions are viewed in a binary way it can cause tension. “All the opinions are so subjective and everyone wants so badly to be right. The work doesn’t flow as it should.” He says that the increased accessibility and focus on digitisation of the industry is allowing more creative possibilities and for more people to make a living in the space. “I think we are on the verge of a second renaissance because of all the digital tools that have made it easier than ever for creatives all around the world, and on all the fields, to create, showcase and monetize their work fairly,” he says. “It’s definitely an exciting time to be a creative person.”

However, the creative director believes that there are two main things that are restricting this anticipated future of growth and digital enlightenment in Latin American advertising. “First, the lack of guts. Many people in the industry, especially in my country, are so afraid of trying new things. Sometimes it’s because they only follow what global tells them. Others because of bad preparation and knowledge. Or sometimes they are simply scared and prefer to go with a familiar path that won’t get them in trouble.” He continues, “We have such creative talent here that is wasted because of the fear of trying and the lack of preparation from the clients.  That keeps our industry medium.” His second reason is that too many projects become a casualty of poor planning and time management - resulting in rushed work that shows in a project’s result.

Pedro offers some suggestions as to what the industry could be doing better to help catalyse this development. He believes that the industry needs improved processes for new talent to develop,  and less toxicity and unproductive criticism.

To remain motivated and passionate about his work, he lays out the philosophy that he tries to live by, “Being proud of myself. Standing out by creating an impact through my passion. Not settling, and pushing for greater things always.” Creativity for Pedro is not simply an occupation, but it has become a way of life - a way of life for which he wishes to be remembered. “[I want] to be known as a person that lives creatively, not only for a living, but in every aspect of his life.”