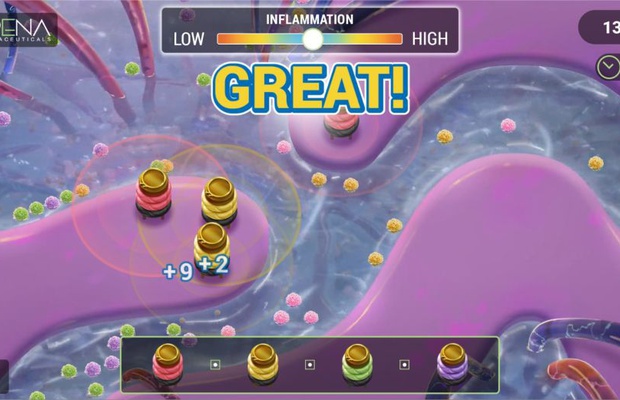 Arena is a new, smaller biotech firm based in San Diego, and a client of Havas Health & You. Last year it had really planned to step out into the world with new findings around IBD (inflammatory bowel disease), which affects people who have certain GI disorders like ulcerative colitis or Crohn's disease.
To demonstrate what they’d discovered, the team at Havas Health & You journeyed down an intriguing path, considering the complexities of what is, at its core, extremely sophisticated science: they used gaming. When a pharmaceutical company is trying to demonstrate the pathophysiology of a drug, they typically use 3D animated videos with a voiceover explaining the science of the medication. They’re not terribly entertaining. But Arena is new and was keen to do something a little different and, according to the team at Havas Health & You, gaming came up as an option early on in the process. They could achieve the same messaging as a traditional video without making their customers potentially fall asleep - it’s engaging and it’s fun.
To bring their vision to life, Havas Health & You brought on board the gaming experts at Gameloft, which is part of Vivendi, the wider network that also houses Havas. “Here we're developing a game for the healthcare and wellness industry that has to be scientifically accurate, but it turns out that science has also proven the benefits of gaming on recall and saliency,” says Quentin Moreau-Defarges, head of creative strategy for North America at Gameloft. “Gaming can benefit your visual and spatial skills, gamers will usually be more effective at multitasking, and will be able to focus longer on demanding tasks. There's a real correlation between playing games and better brain connectivity and how our brains perform; this has been clinically proven. Using gaming is not just a gimmick and to appear cutting edge, it's really an actual effective solution to differentiate and really convey that information relevantly and in the most effective manner.
Initially Gameloft were tasked with building a gaming experience for a healthcare conference in San Diego, until the pandemic put a stop to such events and the team had to pivot to build something that would work digitally. Thankfully they’d been developing in html5 JavaScript anyway so the shift wasn’t much of a challenge. The game they were developing was based around a classic tower defence game: in this case the player would have to control the flow of the lymphocytes in the lymph nodes. The lymphocytes would flow through the lymph nodes and the towers placed by the players on GI pathways would release an aura effect, which would be representative of the drug's effect on the lymph nodes.

“One of our main jobs on top of just providing a creative concept was really to create that stickiness behind the game and making sure that people will not drop the game after 10 or 20 seconds because they think it's too boring,” says Quentin. “The objective was to make sure that the game was enjoyable for the full 60 seconds and that even afterwards people re-engage with the game and re-play it. That's why we thought about adding a leaderboard so that people could compete with each other and try to get the highest score. That's where Gameloft’s 20 years of expertise in game design comes in - that's how we turn the core concept into something that will be engaging, re-engaging for the target audience that is fun to play and visualise.”
That stickiness proved particularly true, with average engagement with the experience at around two minutes. If you think of the game in a similar vein to an elevator pitch, that’s a significant amount of time. It also sparks a conversation about how else gaming could be used in the ever-complicated world of medicine, especially from a B2C standpoint. A big challenge for doctors in caring for patients with long term illnesses is the explanation of why a certain drug is being prescribed and how it will act on the body. Despite its B2B nature, the success of Havas Health & You and Gameloft’s project for Arena suggests that similar benefits could be seen in relationships between doctors and patients.

“The market for edutainment apps and healthcare gamification is going to keep growing in the coming years,” says Quentin. “It can be casual games, like consumer facing experiences, serious games for more targeted healthcare professionals, it can be exercise apps, etc. I personally believe that mental health will become a big focus for gamification, it will be a great channel to build awareness around the condition and also for people suffering from mental health issues to escape and build hope again. There's also motion gaming for the elderly to maintain and improve basic motor skills. Last year the FDA approved the first actual gamified treatment for ADHD. The field is moving super fast and will only keep growing.
“Hospitals are also looking into gamifying the patient journey,” he adds. “Think of an oncology unit for children and trying to get them involved in a story with little games that will help them stick to their treatment regimen. It's really just a matter of thinking about what can be done for all these fields but it's quite exciting.”
In general, Quentin thinks that advertisers could be utilising gaming as a way to speak to consumers more effectively. “The web is enabling so much for gaming at the moment,” he says. “You don't need to download an app or be in front of your PC or TV to be enjoying a good high quality, premium game. You can enjoy that out of home, through programmatic in your web browser, on Instagram, on Facebook, on Snapchat.
“This is instant fun that you have in the palm of your hand. The technology keeps on evolving and supports the creation of these new short gaming experiences that feel really, really high quality and are not just a gimmick. Advertisers will eventually come around and we'll see more and more of these activations in the near future.”