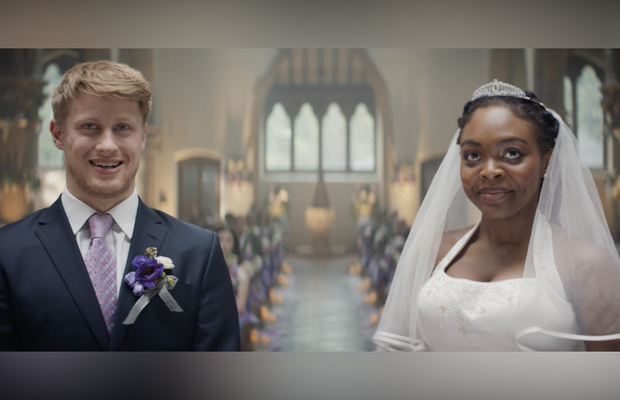 The home-grown version of the global phenomenon has had a major makeover for 2021, taking inspiration from the hugely successful Australian show that gripped British viewers earlier this year. The new UK series is a bigger, more dramatic take on the format, following a fresh batch of singles as they search for love and a happy-ever-after with complete strangers.

The new conceptual film debuts on-air tonight in peak time during Hollyoaks on E4 and kicks off a wider creative marketing campaign that includes social, digital, radio, out of home and influencer activity, as well as a new partnership with Bauer Media which will run across Kiss radio, Heat magazine and Heatworld. Leading into the series’ launch, wedding themed ads featuring the cast of the show will be served on Tinder and launch day sees high profile digital activity featuring a Twitter Spotlight, TikTok Top view as well as a bespoke Snap Lens on Snapchat.

Amber Kirby, marketing director, Channel 4 said: “We are really excited to support the return of a bigger more unflinching series of Married At First Sight UK with this integrated campaign that will drive anticipation for the marriage stories about to unfold across multiple platforms, including strong digital and social activity designed to capture the attention of E4’s young audience. I DO… hope they enjoy it!”

Lynsey Atkin, ECD, 4Creative said: “There’s an old adage about marriage, that it makes an honest woman – or man – out of your betrothed. But what if you’re marrying a complete and utter stranger? We figured that’s the time for some real home truths at the altar. So we created the most honest set of vows around, that promise the drama and absurdity of what will undoubtedly await our star-crossed first-sighters. And after all, everyone loves a wedding...”

Married At First Sight UK is coming soon to E4 and more detail about the show is set to be revealed in the coming weeks. The latest series of Married at First Sight Australia is E4’s biggest unscripted title since 2014 and one of All 4’s top series so far this year.