As the UK telecomms Christmas ad from VCCP London breaks, the company rolls out the National Databank with the Good Things Foundation and reveals longer-term plans to tackle the issue, writes Laura Swinton 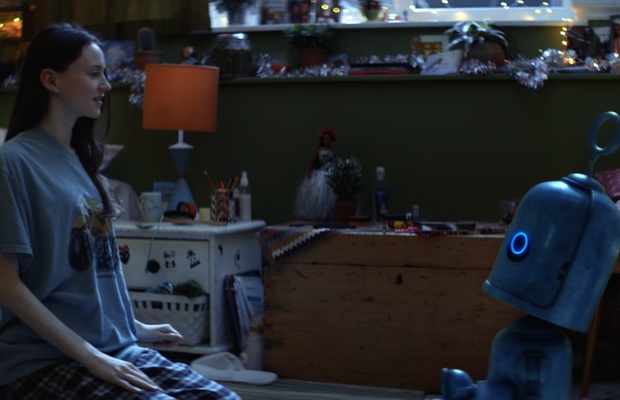 1.5 million households in the UK have no internet access. For a further 2 million, connectivity is a struggle. Digital inequality has been a yawning chasm for years but the pandemic brought that digital inequality into striking sharp relief, as children struggled to access their Zoom classes and businesses and government services accelerated their move online.
And so, this Christmas, Virgin Media O2 has announced the UK-wide roll out of the National Databank, a scheme to help disconnected communities to gain access to the internet. In the current, digitised world, internet access is a necessity for everything from education to job application and accessing government services. Virgin Media O2 has tripled its initial pledge of £12.5 million to the Databank, which is also open to all telecom providers.
This year’s Christmas advertising campaign, created by VCCP and directed for Gary Freedman at Independent, raises awareness of the Databank scheme and the issue of digital poverty.
“One thing we've learned over the last 18-to-24 months is how critical connectivity is,” said Simon Groves, director of brand & marcomms at Virgin Media O2. “People are trying to homeschool, trying to do basic shopping, trying to just get on with all of those things in life. And so it really highlighted the issue of data poverty. Coming out of the back of all of that, when we sat down and we thought about what we want to talk about this Christmas, we felt there was a very different tone at play. And a genuine feeling emerging across all sections of society around a desire for a little bit more community, a little bit more generosity and looking to help others other than ourselves.
“I think we saw that come to the fore during the crisis. Coming out of the other side of that, hopefully fingers crossed, it very much feels like something that people yearn for. So, combining that insight with the timing of the national launch of our Databank initiative, it felt like the perfect time this Christmas, to use our Christmas advertising to highlight this really, really important issue. This Christmas we are making a pledge that no one should get left behind. No one should experience data poverty.”
The ad communicates that data promise and the issue of data poverty with the help of the brand’s mascot Bubl - who Simon describes as ‘our loveable and trusted little blue robot’ - and some friends. It’s a playful and earnest take - the team and their agency VCCP have opted very deliberately not to create an overwrought, emotional campaign. Instead, it’s respectful and portrays a sense of optimism that the problem can be addressed.
Jim Capp, creative director at VCCP London, added: “Over the last 18 months in particular the internet has kept many of us connected to friends, family, entertainment and work. It’s an essential, but we’re incredibly conscious that millions still are without access to those simple connections - unable to work, bank, learn online, keep in touch with family and friends. Imagine that. With Christmas being a time when connection is more important than ever, we’re proud that this campaign is supporting the National Databank in donating data to those who need it. That’s the true spirit of Christmas in my eyes.”
Helen Milner OBE, the founder of Good Things Foundation, believes that the scale of the project means that it could radically improve the situation. “I think it probably wouldn't be going too far to say that what Virgin Media O2 is doing with the National Databank partnering with ourselves could spell the end of data poverty in the next five years. We literally can do this if we work together,” said Helen. “There was a three month pilot earlier in the year. We've supported over 200 people with over 400 vouchers. And the one thing that the pilot has proven is that we need to give people more data. So that's what we're now rolling out with the national rollout.”
Data alone won’t solve digital inequality. At the launch event in London during the week, speakers from local community organisations Hafsha D Shaikh (from Get Families Talking in Birmingham) and Fareeha Usman (founder of Being Woman in Northumberland) who were involved in the pilot, demonstrated that education, skill-sharing and other forms of engagement would be crucial to ensure that the scheme would be inclusive, accessible and successful.
Speaking to Virgin Media O2 representatives at the commercial launch, engaging with the data poverty issue during the pandemic and carrying out the pilot has had a profound impact internally and inspired the business to think about how to make sure the lessons of the pandemic don’t fade and that the organisation changes for the better.
Tracey Herald, head of corporate responsibility and sustainability at Virgin Media O2, said that the world was at an inflection point and it was important to think about the role the business could play in communities moving forward. She explained that the Databank had sprung from a smaller seed, an initiative that encouraged customers to donate their old devices.
“If we really believe our own narrative, which is that being connected digitally is opening you up to a world of opportunity, then we have to live that for our customers, but also for those people who aren't our customers - those who are not connected, who are not engaged with us yet. So the Databank, to me, feels like the first contribution that we're making that's not just about an emergency response in a pandemic, it's about saying that we want to invest in the longer term in communities across the UK,” said Tracey, who says that the 18,000-strong business is also looking to strengthen its volunteering proposition for its employees. “They're really passionate about getting more involved and engaged in their community. My sense is that we've started a conversation about what our contribution ought to be in communities moving forward.”