Virgin Media has called on a star-studded line up of Alex Brooker, Roman Kemp, Sophie Morgan and Lutalo Muhammad for new campaign 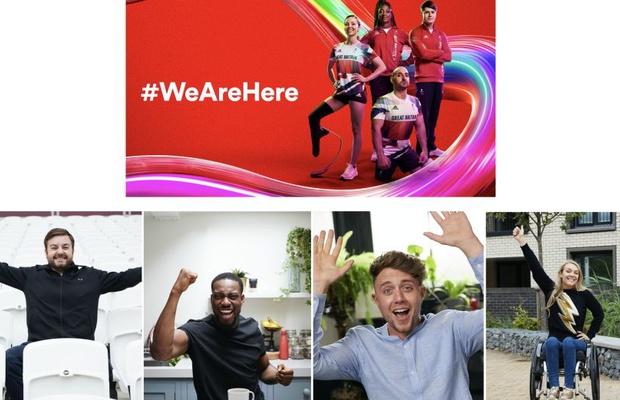 Virgin Media, partner of the British Paralympic Association, has today revealed its campaign #WeAreHere, a virtual movement supported by celebrities and athletes to rally the nation to support ParalympicsGB at the Tokyo 2020 Paralympic Games.

With strict Covid regulations still in place, the Tokyo 2020 Paralympic Games won’t have any fans, friends or families in person to support ParalympicsGB who have trained so hard to get there, making the role of being as loud as possible back home more important than ever before.

Building on its support for ParalympicsGB at the 2018 Winter Paralympics in Pyeongchang, Virgin Media has launched its #WeAreHere campaign to get the British public behind ParalympicsGB in Tokyo.

As part of the launch, Virgin Media has called on a star-studded line up of Alex Brooker, Roman Kemp, Sophie Morgan and Lutalo Muhammad who feature in a film to whip up support and join its social movement: Virgin Media’s ‘Wave of Support’.

The Wave of Support movement is encouraging fans across Britain to upload videos of themselves using the #WeAreHere hashtag on Twitter to recreate their own version of the famous ‘Mexican Wave’. Fans can get creative in their posts as all waves are unique - so, no matter who you are or where you are, everyone can join in.

#WeAreHere is engineered to demonstrate how Virgin Media’s connectivity can help fans show their support for ParalympicsGB athletes at Tokyo 2020 despite being 6,000 miles away and eight hours behind. It aims to make the athletes know that despite the empty stadiums, they’ll still hear, see and feel the support of their fans.

Virgin Media has also partnered with Paralympians Kadeena Cox, Ali Jawad, Stef Reid and Tom Hamer who are all competing in Tokyo. The athletes took part in a photoshoot designed to bring their sporting talent to the fore with a collection of inspirational photos set to feature in the campaign.

To help their friends and families stay connected during the Games, Virgin Media has also gifted the athletes' loved ones with broadband and TV services so that they can be as close as possible to them whilst they compete in Tokyo.

Alex Brooker, proud supporter of Virgin Media’s #WeAreHere campaign, said: “I’m excited to be working with Virgin Media to help keep everyone connected to the ParalympicsGB action out in Tokyo. We want our athletes to know the nation is right behind them and cheering them on every step of the way!”

Simon Groves, director of brand and marketing at Virgin Media O2, said: “With our Paralympians competing on the other side of the world without fans, friends, family or loved ones in attendance, they need our support more than ever. That’s why we’re calling on a host of stars and the British public to join our WeAreHere campaign and take part in the Wave of Support to show them our support that will hopefully spur them on to success in Tokyo.”

The Tokyo 2020 Paralympic Games coverage will be aired on Channel 4 and starts on Tuesday 24th August, 2021.

Esports: How to Play the Game