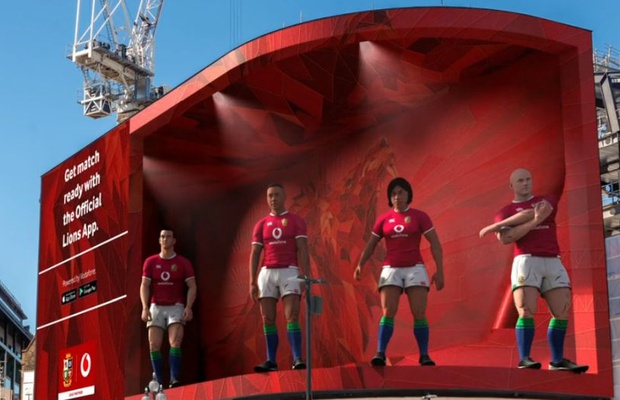 Vodafone is to host a first-of-its-kind 3D immersive experience across the iconic Piccadilly Circus dynamic digital screen in London.

In anticipation of the first test match this weekend, and as part of Vodafone’s aim to bring Lions fans closer to the Tour than ever before, the activation from Ogilvy UK and Ocean Outdoor will see Vodafone’s 2021 British & Irish Lions ambassadors Sam Warburton, Maggie Alphonsi and Paul O’Connell and Jeremy Guscott brought to life as 25ft digital avatars as they burst through a building façade and stand proudly in front of the Vodafone Lions flag.

The digital avatars were created as part of the official Lions app which launched in October 2020 to allow rugby fans to ‘become a Lion’ and fully immerse themselves in the Lions action in the countdown to and during this summer’s Tour.

The 3D experience, which goes live today, will run until the 26th July. It is a celebration of the two iconic brands a demonstration of how the power of Vodafone’s network can connect fans to the action.

The first-of-a-kind technology will be powered by forced perspective, a technique which employs optical illusion to make an object appear farther away, which will be used to create the illusion of a 3D effect. Ocean Outdoor’s digital model of the Piccadilly Lights will be mapped to the precise angle of the screen, which warps artwork for spectators to experience in 3D from an optimum viewing area. Objects will move from deep in the scene towards the viewer, even appearing to extrude out from the screen itself. Piccadilly’s unique curvature offers an ideal stage for 3D animation to bring audiences even closer to the action in digital out-of-home.

The 3D experience takes inspiration from Vodafone’s recent ‘Lions on the loose’ TV campaign, airing now. The advert sees a pack of six Vodafone Lions ambassadors – Alun Wyn Jones, Stuart Hogg, Hamish Watson, Tadgh Furlong, Louis Rees-Zammit and Maro Itoje – running through the four nations and leaving fans in awe as they go. The players are filmed as they travel around the country, with fans seeing the rugby stars unexpectedly bring the sport to their local club, back garden, wedding, holiday and finally into their living room.

Ogilvy UK Reimagines the Office of the Future with 'The Yolk'