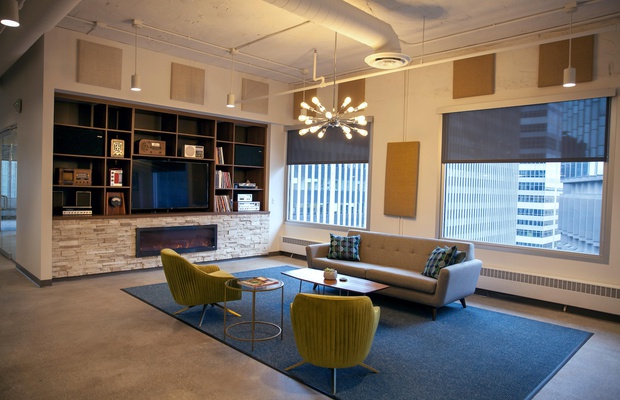 Leading post-production companies Volt Studios and Nice Shoes have moved to an expansive new location at 733 South Marquette Avenue, building off of a successful four-year partnership, as well as Volt’s 11 year legacy of providing high-end production and post production services to the Twin Cities advertising market. Both the move and the build-out are a response to evolving client needs, resulting in a modern, friendly space designed with scalability and future expansion in mind.

Each of Volt’s partners - Nice Shoes, Gasket Studios, Schnitt Edit, SisterBoss, Black Label, Cine-O-Matic and F:30 Films - had a say in how the space would be constructed, resulting in a collaboratively shaped environment that’s conducive to clients engaging one or all of the companies at all steps of the post-production process.

“The new location is up and running, and our clients are going crazy about the inviting and warm feel,” said founder Steve Medin. “Internally the collaboration generated by all of the partners working together has been marvelous. You can feel the energy between all the companies under our roof. We predict that not only will clients enjoy working in the new digs; they'll just wanna hang out. It’s that nice!”

The partnership between Nice Shoes and Volt began in 2014, first through a partnership that connected all of Nice Shoes’ colorists to Minneapolis clients, then later in the year when the studio signed senior colorist Oscar Oboza to officially launch Nice Shoes Minneapolis out of Volt. At the time, the two companies made use of an available room, but the new space offered a blank canvas and four years of client feedback to shape a new workspace together.

“We just completed the move, but we’ve already seen a very positive response from clients who have seen our teasers on social media,” said Nice Shoes colorist Oscar Oboza. “People have been requesting tours, and we’ve been thrilled to have them come by to explore the new space. Anyone who hasn’t come through yet, please reach out. We’d love to have you over for a visit.”

The studios will be hosting small networking events throughout the spring leading up to an official launch party in the summer.