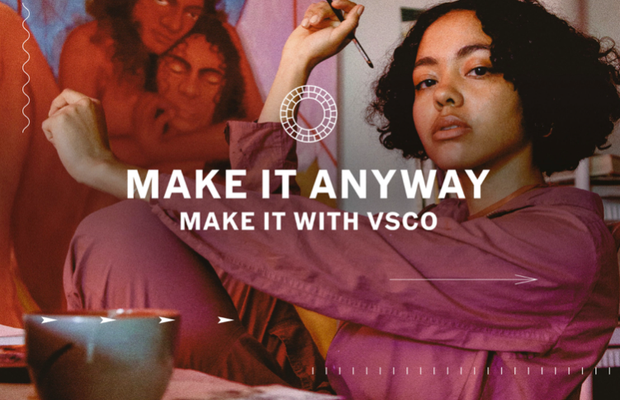 AKQA has produced a three-part documentary series with PRETTYBIRD and creative channel VSCO, whose mission is to help everybody fall in love with their own creativity.
The films respectively profile New York-based painter and illustrator Mónica Hernández, London-based illustrator, filmmaker and collagist Shaquille-Aaron Keith, and Montreal-based photographer Gab Bois, and are led by British underground filmmaker Jess Kohl.
Jess commented: “For the VSCO ‘Make It Anyway’ campaign, I wanted the whole look and feel of the series to be a celebration of the creative process and for the films to be works of arts themselves. Through conversations with our three artists - Gab Boi (Montreal), Monica Hernandez (NYC), and Shaquille Keith (London), I identified symbols, tensions and colours that run through their work and weaved them through the films. I used strong colours to define each artist and give each film a strong visual identity and a sense of otherworldly etherealness. Creativity doesn’t need to be grounded in reality, and I was really excited to have the opportunity to work on a campaign which I could approach really visually, different from my previous work which observes real life. But, I still wanted the message of each film to be universal and relatable - procrastination, low self-esteem, loneliness - so whilst they’re dreamlike in their aesthetic, the stories are very much grounded in reality.
"This was my first global campaign, shooting with 3 DP’s across 3 cities in 6 days. We chose to shoot on 16mm because it soaks up colour so richly, and is reflective of VSCO - many of the apps filters reference analogue film stocks.”
The series explores the ever-evolving nature of the creative process, with each instalment, blending intimate original footage with insightful examinations of the artist at work, to explore who the artist is, where they’ve come from and how they create. A mix of transparent observation and artful symbolism conveys the various themes of each artist’s life and creativity, showing how their unique life experiences drive every new creation.
The films are scored with abstract soundscapes, and include spoken interview segments that discuss the importance of creating despite any internal or external blockers, expectations, or judgement.
The VSCO platform uniquely does not feature public ‘likes’, ‘followers’ or comments, and thus encourages creators to let go of the notion of perfection and enjoy the creative journey, in an environment that promotes mental health and wellbeing.
The series will be distributed through video channels and in partnership with outlets such as VICE and HYPEBEAST, reaching relevant audiences of creators.
VSCO chief marketing officer Tesa Aragones says: “The Make It Anyway campaign encourages creators to push through challenges and find freedom in the creative process. Whether the output lives up to the vision, whether or not others approve, choosing to ‘make it anyway’ is a step towards confident self-expression. At VSCO, our mission is to help everybody fall in love with their own creativity, and we are proud to give a safe space for creators to explore, discover, and grow.”
AKQA managing partner Geoff Northcott adds: “Creativity isn’t a qualification, moreover it’s inherent in all of us. This new documentary series reveals this underlying truth, and tells the unique stories of three creators as they fight to break through self-doubt and the pressures of constant delivery and social validation. Make It Anyway is an ode to imagination and our universal creative purpose, and reminds all of us that ultimately we are all, always, works in progress.”
AKQA worked with VSCO to define the concept and manage production, and also handled the post-production and social assets.