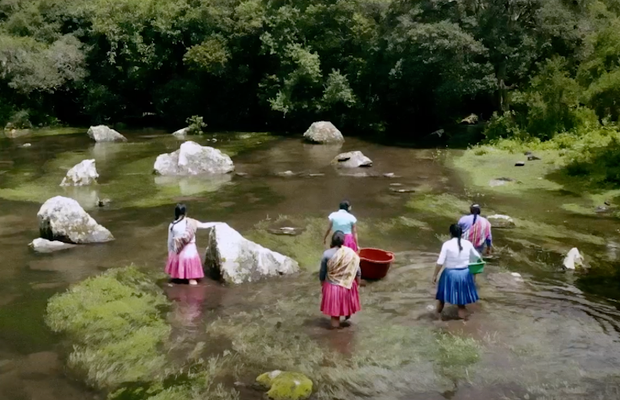 In the world, there are still 159 million people who depend on untreated water (rivers, lakes, ponds, streams). Due to this and their cultural heritage, a significant percentage washes their clothes in the rivers. In Peru, this heritage is attributed to its Inca origin, and doing so is also an opportunity for socialisation among the women of the villages.

Unfortunately, the soap they use to wash their clothes contributes to the contamination of the river on which the entire community depends (even from which they extract the water to drink), unconsciously causing various diseases.

ANDEA (the mineral water of Cusco, whose purpose is to preserve the natural sources of the Andes) and its creative agency Fahrenheit DDB, decided to draw upon the thousands of people who wash clothes in the rivers to, through them, begin a decontamination process.

After several months of research together with Cirsys (a Peruvian innovation start-up that seeks technological solutions for social development), they managed to find a microorganism with a probiotic function capable of feeding on pollutants from the river. Introducing these microorganisms in bars of soap, AWA was born, a soap that improves the quality of water when washing clothes, proving to have up to 75% efficiency.

ANDEA has made the AWA formula available to governments, non-profit organisations, social enterprises, and soap manufacturers, so they can apply it. That way, AWA will reach the right hands and the rivers where these ancient traditions are still carried out. For more information and to contact the project leaders, go to the website.