“We Don’t See Each Other Anymore” 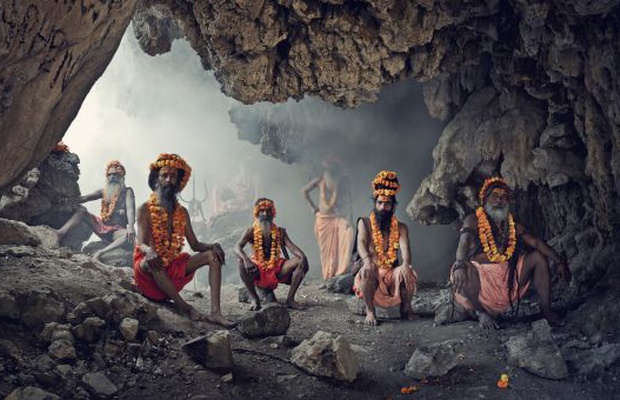 Jimmy Nelson has spent his life travelling to the most remote parts of the world, meeting people from a constellation of indigenous cultures – listening to their stories, hearing their thoughts about how they reconcile their heritage and traditional way of life with a globalised, tech-driven world, giving them a platform to share their ideas and experiences. He’s worked with the Dolgan people of the frozen expanse of the Anabar region of Siberia. He’s travelled with the nomadic Wodaabe people across the stark but colourful wuro landscapes of Chad. But after his years of connecting with people, it was a recent encounter en route to an important presentation in Manhattan that gave him a jolt. A pressed-for-time businessman, absorbed in his phone as he pounded the pavements, bumped into Jimmy – and confronted him with a violent threat.
“I went into the presentation and some very well-spoken American said, ‘Aren't you afraid of these people? Isn't it dangerous?’,” recalls Jimmy. “I facetiously answered that I'm never in danger because these indigenous communities see me. I'm terrified when I'm walking past 80 million people in Manhattan - because we don't see each other anymore.”
As a photographer, Jimmy’s interests in indigenous communities isn’t some removed, academic affair. He grew up following his geologist father around the world.  The 51-year-old has been out of formal education since he was 17 and he’s driven by the desire to explore the value and validity of the human experience. His images are striking – romantic, he admits, but romantic, he insists, because they have to be. He is recording a perspective on humanity that is fast disappearing in a globalised world.
Most recently, Jimmy’s work has taken him face-to-face with another idiosyncratic culture – the world of the advertising creative. Jimmy was introduced to Bas Korsten, CCO at J. Walter Thompson Amsterdam and creative lead at J. Walter Thompson globally, by one of Jimmy’s employees. She had come across Bas in a magazine and figured that, since he was based round the corner, the team should meet. And what a fateful meeting it was.
The thought of the future of creativity was weighing on Bas’s mind. Having wowed the media world with his artificial intelligence project The Next Rembrandt, the question of whether creativity would be driven by AI or humanity was one that Bas had opened to the world. Jimmy’s emotive and powerful images of a disappearing world spoke to Bas immediately. He knew he wanted to spread Jimmy’s message.

The J. Walter Thompson collaboration has proven to be a fruitful one. Just last week, the first execution emerged – a striking film from JWT India called ‘Blink. And They’re Gone’. That takes hundreds of Jimmy’s still images and weaves them together to create a dynamic journey around the world. It’s the brainchild of JWT India CCO Senthil Kumar, who saw Bas’s presentation to the network’s creative council and was inspired. In 2014, he’d made a spot for Nike that cut together 1,440 Indian cricketers to create an animated collage https://lbbonline.com/news/how-nike-india-made-every-yard-count-with-1440-cricketers/ and he saw the potential to push the technique further.
Jimmy experienced a visceral reaction to the earliest cut of the film, seeing his work condensed and brought to life. “I started sweating straight away when I saw the first clip. I thought, ‘Well this is it. This is it.’ It's not only an extraordinary exciting creative collaboration but a moment of being seen and understood,” he says. He was in Mexico, attending a conference at the time – and was able to share a sneak peek of the film with Carlos Slim, the country’s richest man and the world’s seventh richest person, who shared his excitement.
Since launching last week, the film has reached 664,000 people, clocked up 22,000 views on Facebook and has reached 559,965 people on Instagram. It’s struck a chord with the media, garnering a feature in UK newspaper The Sun.
But the film is just the beginning of the collaboration between Jimmy, his foundation and J. Walter Thompson. From the start, Bas and the team saw an opportunity for the technology that has played such a role in erasing cultural uniqueness to amplify the voices of people in indigenous cultures. And so, they’re gearing up for the launch of an ambitious digital component of the project.
“It's going to be a project with technology at the heart that's actually going to help preserve cultural identity across the globe. And I think the film is a teaser,” says Bas. “I mean the technology that actually led to the homogenisation of culture across the globe, well, we’re turning it against itself. So, we're going to we're going to have technology help spread these images across the globe.”
For Jimmy, who has spent his life connecting with cultures across the world, one of the most potent lessons that he’s learned is the importance of reciprocity. And that spirit infuses the innovations spreading his message. With his latest book 'Homage to Humanity', for example, he’s released a free companion app that allows anyone, whether they've bought the book or not, to scan his images and delve more deeply into the stories via VR and 360 video. And it’s a spirit that’s fuelling this current collaboration and the joint mission to raise awareness of the world’s indigenous cultures.
“I'm often asked, ‘what lesson do you learn when you're in these communities?’ And among the many, one of them is reciprocity. I'm always told wherever I am that you can only get if you first give.”
The project has emerged at a time when the tensions of globalisation have manifested in unhealthy violence and political protectionism. That Jimmy’s work with indigenous communities has resulted in conversations with people who are torn between the benefits of technology and the importance of their cultural roots at such a time is not lost on Jimmy. Fear and judgement have taken the place of nuance and connection. “Any wall that could be built or any cutting off all ties and becoming an island - in my opinion, and I'm not a politician - but I have the common sense to see that's not going to solve anything,” he says.
Looking forward, Jimmy’s team and the J. Walter Thompson crew hope to help indigenous communities protect their identities and cultural heritage while using technology to forge bonds and build bridges – the two don’t have to be mutually exclusive. They’re tight-lipped about what this project is going to look like (watch out for it in the first quarter of 2019), but they’re audibly excited. Ultimately the hope is that, whether we’re traversing the Siberian tundra or rushing around the streets of Manhattan, it’s a project that lets us see each other a bit more clearly.