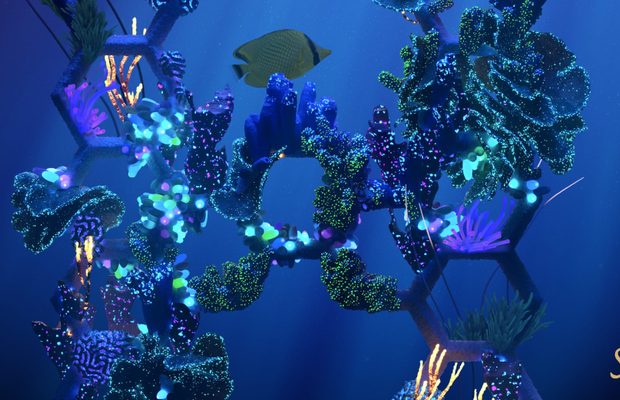 Scientists estimate that if the world does nothing, 90% of the world’s tropical reefs will be gone by 2043, impacting nearly 500 million people who depend on them. The idea was to build Sheba Hope Reef, a living, thriving coral reef, planted in August 2019 on a site where there was once only barren, dead coral rubble. The reef, at the heart of the Coral Triangle located off the coast of Sulawesi, in Indonesia’s Spermonde Archipelago, was built using innovative coated structures known as weareseventeen Create Visual Identity for Coral Reef Restoration Project - Hope Grows.

Reef Stars, showing that there can be man-made solutions to man-made problems. The reef spells out a message, ‘H-O-P-E’ and in doing so creates a living billboard, that puts the urgency of the issue and its potential solution on the map. Reef Stars were also used as the basis of a bespoke visual identity – creating an animated growing coral typeface for use in outdoor, social and online, developed and created by weareseventeen.

weareseventeen creative director Jason Drew: "After proposing an ambitious and fully procedural coral growth system for a bespoke, animated typeface we were thrilled that the SHEBA Mars brand and AMV took the risk. We're really proud of the results with each character having a unique, organic coral reef growing across print and digital. The best part is it's all to promote a cause that we are very passionate about, which will hopefully make a real difference to the survival of our reefs”.

Nando's Invades Your Mind in Campaign from Partizan's Ali Kurr