What on Earth Does Santa Do with All That Milk? Asks Dairy Farmers of Canada 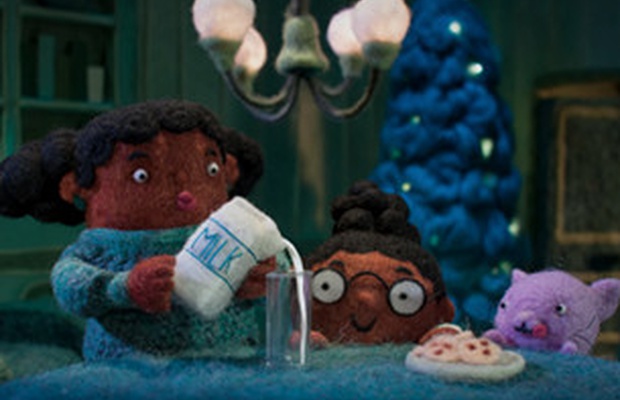 In many parts of the world milk is a drink synonymous with Christmas Eve. Before heading to bed, anyone hoping to score last minute brownie points with the Big Man will leave out cookies and milk out for him(although he always got a shot of whisky in my household as an added bonus).
The Dairy Farmers of Canada and its agency DDB Toronto are riffing off this Christmas tradition in a new festive spot. Shying away from the brand’s usual message of milk’s health benefits, ‘A Glass for Santa’, is a far more emotional and nostalgic story that explores just what Santa does with all that milk. The story is told via some adorable felt animation by Portland outfit Bent Image Lab and director Rob Shaw.
LBB’s Addison Capper spoke with DDB Toronto creative director Craig Ferguson to find out more.
LBB> Much of the Dairy Farmers of Canada work focuses on the health benefits of the drink - this is much more emotive and shies away from that. Why so?
CF> The holidays are an emotional time of year - and milk plays a unique role in the holiday tradition. We felt this was a unique opportunity to connect with people on a purely emotive storytelling level.
LBB> Leaving milk out for Santa is a tradition followed in numerous countries, so the tie-in is pretty natural! But what kind of conversations led to the final idea?
CF> We’re always looking for places in culture where the brand has a natural role to play. This is obviously one of them. Once we had that starting point we just toyed with different stories we could tell.
LBB> The animation is gorgeous - why was Bent Image Lab the right team to bring this to life?
CF> We were blown away by their approach and desire to create a world made of felt. It had the appropriate warmth and sweetness and felt incredibly distinctive relative to a lot the other stuff we see out there.
LBB> Is the felt style something they recommended or was it always part of the plan? Why?
CF> Nope. That was all Bent and Rob Shaw, the director. It felt like it had the right mixture of nostalgia and freshness.
LBB> What was the production like and how were you involved? Was it more a case of letting the animation team do their thing?
CF> Rob and his team are super collaborative. We all shared ideas throughout the process, but ultimately, we trusted Rob and his team to do their thing.
LBB> Who did you work with on the Stevie Wonder cover? Did this track come into play quite early on?
CF> We worked with our audio production partner Grayson Matthews and Supergroup. We looked at a bunch of avenues but Stevie Wonder rose to the forefront pretty quickly. The artist on the track is Maya Killtron.
LBB> There’s also a Spotify playlist that feeds into the campaign - what can you tell us about that and why was it something you were keen to integrate?
CF> It felt like a natural extension and an opportunity for the brand to continue its story. It’s an emotional time of year. Music is hugely emotive – especially holiday music. So it felt like an obvious thing to do.
LBB> What were the trickiest components when bringing this together and how did you overcome them?
CF> Not getting lost in the fun of building things out of felt and making sure our story still came through. Rob and his team had so many great ideas, but we all had to keep focus on the story and the time we had to tell it.