What Would Planet Earth Say if It Could Speak to Us? Real-Time Campaign Gives Earth a Voice 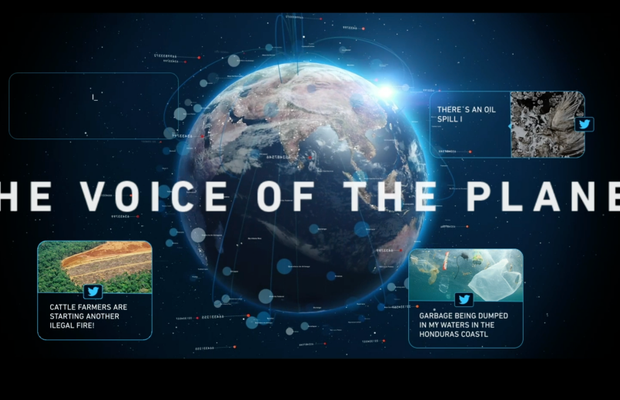 This Earth Day Greenpeace Colombia has given planet Earth its own Twitter account. The @EarthIsSaying is aggregates data from around the world, which is then translated into messages that let us know how the planet is feeling.
Climate monitoring stations around the world are providing real-time information on forest fires, pollution, climate warming and CO2 levels, and other indicators. Those signals are then synchronised with a machine learning platform that classifies and converts the information received into a Tweet. All without passing through a human hand.
The project, which launched for Earth Day was conceived as a way of turning dry and unrelatable numbers into an emotional and meaningful message. Personifying planet earth, the agency believes, is the most effective way to drive home the impacts of climate change.
“After 4.543 billion years the earth has its own voice. As its inhabitants, it is our duty to listen carefully, regardless of our country of origin, to take the necessary measures to care for it and preserve it before it’s too late. That’s the goal of this idea” Sebastián Benitez, General Creative Director of Grey Colombia
According to Juan Jose Posada, CCO and President at Grey Colombia, the team started from the thought that perhaps one could interpret natural disasters are how the Earth is already trying to communicate with humanity.
“We assumed that global warming, floods, polar ice melting and most natural disasters are the way that earth communicates with us trying to say that something isn't well, that something is hurting it, that's planet earth’s language, that´s it´s way of saying HELP!, but humans don't seem to get the message, we want to give Earth a voice to communicate with us in the way that we do. That's where the idea started from,” he says.
But the campaign isn’t just about giving the Earth a voice – it’s also rooted in trying to change human behaviour. The human brain process large numbers differently to intimate, individual stories, which is why we don’t always respond with much urgency to large scale catastrophes. And so personifying the planet and giving people the tools to interact with it as they would with someone else on social media might help to reframe climate change and help people ‘hear’ what the Earth has been ‘saying’ for years.
“We, as humans haven't heard any of the messages sent by earth, so at least we had to give it a try, by sending real time alerts and tagging the incumbents that can do something to help, and adding popular scrutiny, but most importantly, by pointing at the problem  with exact data we think we´re putting together a whole bunch of tools to and try sending those messages in a different way. It is all down to this new generation to amplify it and potentialize it” says Juan Jose.
It’s a slick idea but behind it, there’s a lot of complex data, pipelines and technology. The campaign integrates a lot of live data from monitoring stations and researchers around the world. Coordinating all that and connecting to all of these data sources was no mean feat.
“That's exactly the tricky part, that's what took us so long to adjust; we had to find the right sources of information all based on scientific facts and measures, also, we had to understand which were the parameters that would trigger the alarms if exceeded, to do it too soon would trigger unnecessary alerts, so to get the right balance is key,” says Juan Jose. “Besides, many sources are very comprehensive for us, average data surfers, but some sources require advanced interpretation skills provided by engineers and data analysts for us to understand and digest. Sounds simple, but it does require lots of work to feed the algorithm.”
Rigging all of this together and refining it presented several quite technical and creative challenges and the team underwent a rigorous beta testing phase. The algorithms couldn’t be too over-sensitive and alarmist, but neither could they be to lax.
“Having the exact number at which alarms should be tweeted has been the toughest challenge. Also, believe it or not, there are days in which no tweets are launched, because numbers are inside the ranges, so there was a time during the beta testing in which for four days nothing happened, and we were worried that something had happened to the platform, but then we though, hey, this is not bad news, on the contrary, is fantastic news meaning no tragedies will occur in a couple of days,” says, Juan Jose.
As this is an ongoing project, the team will continue to tweak things too. “And of course, as we keep on widening the range for the tool, it will find more things that aren´t right, we know we need to find the right balance so people don't get bored if no tweets appear or too many tweets hit their timeline. The tools get better every day, especially as it uses machine learning to tweak the algorithm: Quite a challenge but we’re very satisfied with the outcome.”
While the campaign has a lot to say about the environment – literally – it’s also an interesting demonstration of how brands and agencies can use data creatively. It also shows how creativity can help us make sense of data into meaning and emotion. It’s certainly given Juan Jose and the rest of the team at Grey Colombia plenty of inspiration on that front too.
“Excellent question, data has brought an excess of reliance on the information, but really, in terms of communication and advertising, what are data, technology, machine learning, social networks, technology and all of those fancy modern names if we can´t put “soul” into it, if it doesn't have a big idea behind it ?, @EarthIsSaying proves that all of those tools are spectacular if they can be put together at the service of an idea.”
You can follow @EarthIsSaying on Twitter.

Reach for the Stars: Check Out All the Cannes Lions 2021 Reach Grands Prix Winners