“Where’s the Beef!?” The Work That Made RPA’s Romeo Cervas

The RPA associate creative director on the Wendy’s classic that was a childhood favourite, a Michael Bay spot that made him want to make ads, and an example of branded bandwagon-jumping that made him angry 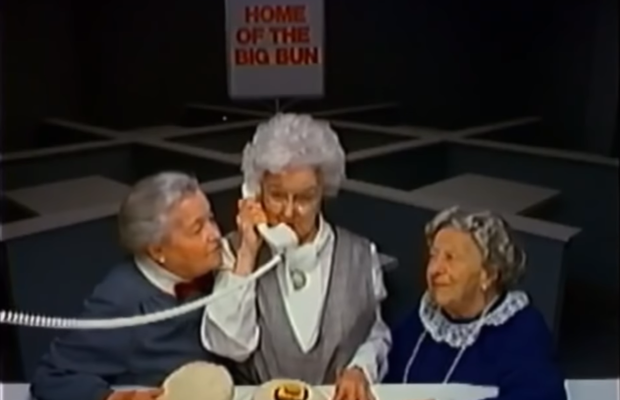 Romeo Cervas began life in advertising as an art director at McCann, Goodby Silverstein & Partners and Y&R. He has led creative for the likes of McDonald’s, Microsoft, LEGO, HP, BET, ESPN, Musclepharm, NVIDIA, OneWest Bank and The ABC Network but these days runs the day-to-day operations on all things social for clients such as Honda and Acura in his role as associate creative director at RPA. He also uses his experience to train the next generation of creatives by teaching a portfolio class for The Book Shop School of Ads, helping others embrace creativity in the rapidly changing landscape of art and commerce.
But what got him into this industry and what was it that made him stick around? Romeo gives us the lowdown on the work that made him - his favourite childhood, the work that still makes him jealous, and loads more.

The ad/music video from my childhood that stays with me.

Wendy’s - ‘Where’s the Beef’ (1984)
Being a kid in the ‘80s, I remember watching that Wendy’s commercial for the first time where Clara Peller delivered that famous line, and it stuck to me like glue. Soon after that, any time I would eat anything, I would stare down at my food and yell, “Where’s the beef!?” thinking to myself it was the funniest thing in the world, although I’m sure my parents thought it was nails on a chalkboard after my 50th time saying it. It even got to a point where I would say it for non-food-related things, like whenever I would get a present or be told to do a chore around the house. Although I stopped saying it aloud, there are still times it randomly pops into my head.

The ad that made me want to get into advertising.

Got Milk? - ‘Aaron Burr’ (1993)
I’m not a Michael Bay fan by any stretch, but the ‘Aaron Burr’ Got Milk commercial that he directed back in 1993 that jump started his career, it made a name for GS&P and began of one of the most memorable campaigns of all time. It was a huge inspiration for my career in advertising. It was the first time I watched an ad and wondered where it came from. I didn’t even know what advertising was, but I just remember it being so smart and relatable that I needed to know who came up with something like that. It wasn’t until much later that I found out about advertising as a career, but without that I would have never had the curiosity that eventually ended up with me getting a gig with GS&P.

The creative work that I keep revisiting.

Giantology - ‘Shadow of the Colossus’ (2005)
It’s been almost 15 years, but I still always reference the Giantology campaign that TBWA\Chiat\Day\LA and Tequila\LA created for Sony PlayStation’s Shadow of the Colossus. It blew my mind how totally different it was than anything else anyone was doing in advertising at the time and probably one of the earlier ‘viral’ campaigns out there that made use of real-time conversation, connecting to people on a deeper level and getting an audience to be an active participant in a campaign. What I loved most about it didn’t rely on any of the traditional stuff like a TVC, OOH, Flash site (RIP), or digital takeovers. Instead, they saw where their audience consumed content and built the campaign around things like news reports, blogs, message boards, emails, early podcasts and articles, all to create a huge hoax that giants actually exist. And it sent a ton of people on a wild goose chase around the world in search of giants, until one by one people started figuring out this was all just a big stunt for the release of a video game. Once people found out, everyone lost their minds and had to get the game just to be a part of the in-crowd. It was brilliant, and it’s one of those campaigns I wish I had thought of.

In 2004 I got an internship as an art director at MRM-McCann, San Francisco, working on everything digital for the Microsoft business. During my interview, I was asked if I knew how to use flash, and I quickly answered with a resounding ‘YES!’ That was a lie. As luck would have it, I got hired, but then my luck ran out when I was given my first assignment resizing banners in Flash for a Microsoft ‘Your Potential. Our Passion.’ campaign. So, I spent my first assignment quickly trying to teach myself Flash basics.

The piece of work that made me so angry that I vowed to never make anything like that.

Pepsi - ‘Jump In’ (2017)
The Pepsi ‘Jump In’ commercial in 2017 featuring Kendall Jenner did just about everything wrong in regard to effective brand messaging and showed a total lack of understanding of what it means to drive conversation around culture. It was extremely tone-deaf, disrespected history and culturally appropriated the Black Lives Matter movement all to try to push carbonated sugar. And why they chose to have Kendall Jenner, a white woman from a polarising family, as the representative for unity and peace by marching in the frontline of the spot when she has zero authority in the space is beyond me. In this day and age, brands need to be held accountable for helping move culture forward rather than exploiting it. So, when a brand represents itself by thinking it can just jump on the bandwagon and having an extremely shallow stance and tonally incorrect voice on culture, the comments they then receive on social media are completely justified. Other than that, it was great.

The ad that still makes me jealous.

Netflix Finals - ‘Guinea Pig’ (2015)
On a totally different note, I love everything about this campaign. It’s a really memorable idea that didn’t need a big budget to execute or took itself too seriously and just connected with people on a simple human level. Everything from the simple, art-directed setup, to lighting or lack thereof, to the use of Periscope, to the use of a guinea pig as the principle talent, to the simple insight that people watch Netflix to avoid studying are the things that embody the quick and nimble nature of social advertising in today’s landscape.

The creative project that changed my career.

Honda - ‘Civic Dream Track’ (2016)
Full disclosure: I wasn’t the original creative on this project. I was freelancing at RPA working on various digital projects, when a team needed help on a social concept they were working on. It was a pretty rough concept about making a crowdsourced car-stunt track from Honda fans across Twitter and Facebook. Beyond having a name and the thought of using social in some way, there wasn’t much else to go off of. From there, I built the campaign from the ground up, from leading the team on the day-to-day, to figuring out how to engage with fans on social channels, to coming up with the look and feel and visualising how the stunts were going to get pulled off. In the end we created the first-ever crowdsourced stunt track, and because of how I was able to bring life to that project, I was offered to come on full time and head up the social creative end on the Honda business.

The work that I’m proudest of.

Honda - ‘Accord Awards’
One of the most challenging campaigns I ever worked on was a social campaign for the Accord. The basic idea was based on the fact that year after year, the Accord is one of the most awarded and celebrated vehicles on the road. So, we came up with a simple concept where social users would nominate their friends via @mention for random everyday achievements, and Honda would celebrate them by sending customised 3D animated awards in real time. As easy as this sounded in theory, executionally it was pretty much impossible to pull off. Somehow, we were able to find a way to make it work and, in the end, a new technology was developed to create an infinite number of customised trophy characters with animated celebratory movements that would automatically be sent to users if they were nominated. Some of the things people were nominated for were things like, ‘biggest shoe collection’, ‘best karaoke singer’ and ‘biggest football fan’.

I was involved in this and it makes me cringe.

A long time ago, I worked on a pitch for a Southern California-based bank that will remain nameless in this article. We ended up winning the business and were ready to hit the ground running to create a full launch campaign. Then along came the budget, and all the hopes of doing anything original like a shoot were flushed down the toilet. The solution? Stock. A lot of stock. The clients wanted to show a Southern California lifestyle, but what that ultimately meant was stringing together a bunch of clips of affluent white people living the type of life most Southern California residents could never even dream about. To make matters worse, we had to rotoscope a lot of these clips of people against different stock clips of mega mansions. Needless to say, the end product was a completely slapped together hot mess that I’m sure opened a total of zero new bank accounts.

The recent project I was involved in that excited me the most.

At the tail end of December, we had one of those wild-hair ideas we proactively thought of for the Super Bowl. Since brands can’t legally say the words “Super Bowl” in advertising, we played off that fact and came up with a “Superb Owl” campaign featuring a sports announcer commentating on owls in nature paired with sports-highlight graphics. Superb Owl is a joke that fans in the know are aware of on social, so around the agency, we all got really excited about the potential of how much conversation could be built around owls during game day. So, once we were back from holiday in January, we pitched it to the client, and they fell in love with it. And then it hit us that we had less than a month to somehow pull all this off. So, then it was off to the races to try to get the campaign live in time for the Super Bowl. No pressure.

Kids Teach Their Parents in Heart-Warming Campaign for PBS KIDS