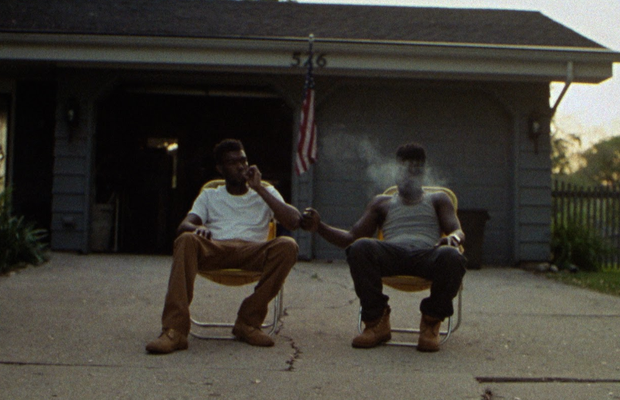 In the video, we find Mick Jenkins in a black suburban neighbourhood. While we follow his routine of waking up and watering his lawn, we slowly see his neighbours replaced by white doppelgangers.

Director Andre Muir shares his thoughts on the work: “The idea began as a reaction to the darker vibe of Mick’s song. The melody of the song felt very broody -- like we're waiting for something to emerge from under the surface. It reminded me of an underbelly of sorts. A type of seediness. Thinking about the name of the song “Truffles” which is this extremely rare and sought-after fungus that grows underground. It almost felt like synchronicity.

"There’s a line in the song, “Here goes another young man making trouble.” I loved this line so much. There’s just so much underlying substance and gray area with it. There are so many different ways to interpret that.  And the way Mick uses it in the song, it’s almost as if its meaning changes in every iteration of it in the chorus. On the surface level, you can look at it as the type of complaint “a Karen” would make – “here’s a Black man in America causing trouble.” But you can take a step back and look at it another way as well, here’s another black man causing trouble, upsetting the status quo. Trouble for some is liberation for others. What does upsetting the status quo look like? A black man fighting for their dignity? A black man being successful? A black man unapologetically existing? Those questions immediately created the visual of a black man standing in a white world… or more specifically a black man standing in the middle of a white suburb. So, the video originally started with this black man in a kind of fish out of water scenario, but then I ended up flipping that as well.

"I’m just super over-critiquing white folks and am all about affirming ‘black folx.’So instead I wanted the story to take place in a black world. A black suburb. I also wanted to place it there just because there’s this kind of myth of Black suburbia… like it never existed (there definitely were black suburbs, however after redlining and unequal schooling these residential areas faded away but that’s a conversation for another time…), so I thought it would be an interesting setting for this video. It's kind of was timely as you see places like Tulsa kind of finally getting the shine it deserved.

"The fact that that chorus’s meaning kind of changed with each iteration, led to the idea of repetition, which eventually played itself out as a Groundhog Day kind of story, where Mick wakes up each day as his neighbourhood slowly gets replaced.

"Having the white kids smoke was a little inside joke to me. WE ALL SMOKE, but only one group really gets in trouble for it. And looking back, all the activities are kind of nods to things blacks have been arrested for, whether it's running while black, or even trying to get back into your home. The fact that I even use the language that it’s a joke, kind of speaks to how ingrained racism is, in our society

"With the concept, I wanted to personify gentrification. So often it happens and it almost feels like an invisible force that’s just changing your childhood neighbourhood around you. So, I wanted to put a face to it. The point of the video wasn’t necessarily to demonise white people; we see them move into the neighbourhood and eventually into his home, but they’re not malicious. The fact that they weren’t malicious was intentional – they’re not like intentionally after Mick, instead the video is kind of a personification of White Indifference. Mick and the rest of his neighbours may as well be invisible to these characters as they move in and replace them. I think the idea of indifference is almost in a way even sadder.

"There’s nothing more American than racism. From horrific violence to everyday microaggressions, lack of housing, lower pay scales, limited job opportunities, biased educational systems and their lack of quality educational resources, healthcare funding, and the gentrification of our communities. This has been going on for decades, centuries, generations, and we’ve all kind of internalised it.

"The ending shot is kind of the culmination of all the ideas of the video, being pushed out of your home while almost looking like a criminal. Who knows what he’s going to do, is he just looking at his old home that was taken from him, is he planning on taking his home back which he would be justified in doing? What would happen if a cop saw him staring outside his own home? There was this story of Harvard professor Henry Louis Gates getting arrested for trying to get back into his own home that just always stuck with me as a kid, it really made me think twice about the way I could move about in society.

"Mick was amazing to work with. His music is amazing, very conscious, very thoughtful, very deep but also still fun and funny. He’s definitely one of my favourite rappers out right now so it was amazing to get a chance to work with him. We actually we’re originally supposed to collaborate on another song with another video idea but it was just a bit too ambitious at the time. A year passed and Mick shared this song with me and I immediately connected with it. Creatively Mick was very easy to work with. There’s a trust there that not a lot of other artists really have. He lets you do your thing. I think part of that comes from him really knowing the essence of the idea. I think since he knows the idea, the kernel, and heart of it, he can trust you with the arms and hands of it, the limbs.

"The aesthetic of the video really came about after talking it through with the DP Patrick Scola. I had really admired the photography of Larry Sultan and William Eggleston and the artwork of Eric Fischl. They all have elements of that kind of underbelly of Suburbia in them and we discussed how we could show that aesthetic but bring that seediness to the surface."