With AdGreen’s new resources guide, carbon calculator and an industry levy to fund it, this year could see a step change in how production views its carbon footprint, writes LBB’s Alex Reeves 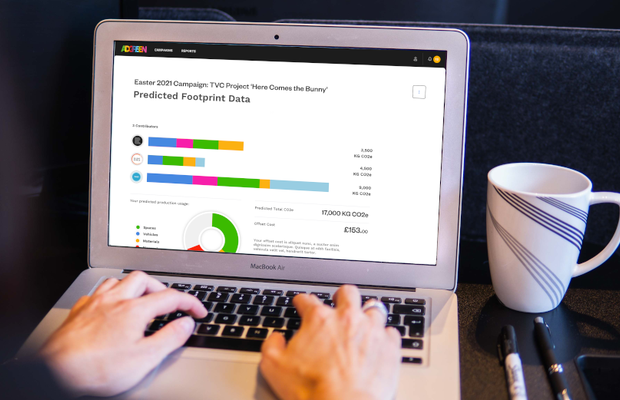 Thanks to AdGreen, the UK advertising production industry may soon be the most carbon-aware in the world. Founded in 2014 by then production manager Jo Coombes, 2020 saw AdGreen join up with the Advertising Association, and 2021 sees some huge new introductions.
Recently, AdGreen announced that it would be launching its carbon calculator this September - a tool that will be free at the point of use for all in the advertising industry. It also launched its resources guide to give ad production teams an easily digestible handbook on how to start their journey towards net-zero carbon emissions. And to keep the resources, tools and training it provides free at point of use, a voluntary levy is being introduced for advertisers to contribute a small percentage of production cost estimates towards AdGreen’s operational costs.

Back in 2014, initial collaboration with BAFTA's albert tool inspired Jo to create the AdGreen website, largely as a repository of resources (tested on her own shoots while she worked as a production manager). Now she is the project manager of AdGreen and its place in the UK production community is ingrained.
AdGreen’s mission is to unite the industry to eliminate the negative environmental impacts of production. Rather than acting as a consultancy, the project offers free resources, training, and tools to enable the advertising production community to measure and reduce its carbon footprint.
AdGreen launched in the UK but with global ambition to enable the industry, wherever the activity is, to act for a sustainable future.

The first part of AdGreen’s new offering in 2021 is its resources guide, which equips production teams - whether in creative and production departments at agency level, production company teams, post-production companies or those working as a supplier or in the crew - with tools to take action where they can each make an impact. It’s full of suggestions built on practice that have been proven to reduce a production’s carbon footprint.
Jo describes the resources guide as a bridge between the regular training that AdGreen already offers and the carbon calculator, which will be operational in September. Much of it was built on feedback from people who’ve completed the training asking for resources to put their training into practice she says. “People are past the point of wondering whether they should do something; they want to know what to do. So, it's definitely a response to that. And it's a digest of everything that's already on the website.”
There’s plenty there to sink your teeth into between now and September if you want to begin reducing the impact of productions you’re working on, but it’s the carbon calculator that will form a jewel in AdGreen’s sustainability crown.
Currently in development, Jo reflects on many of the decisions that have been important along the way. One fundamental question has been how bespoke to the advertising industry to make it. BAFTA’s albert platform has been a crucial factor in forming AdGreen’s advice for minimising impact on productions, but it is built for film and TV production, not advertising.
“It felt like to not build on the work albert had done would be really crazy,” says Jo. So the AdGreen calculator has been developed from albert's established online tool. The tools will share the same core calculator functionality, ensuring both industries benefit from upgrades and insight, but AdGreen's will have a unique structure including bespoke user types and security rules relevant to the industry's many stakeholders. “It will be bespoke to the way our industry works,” says Jo, who has brought her own advertising production experience to bear on its design, as well as the expertise of the many parties involved in AdGreen. She reflects that it’s been built on the back of “lots of different considerations that make it very, very niche, but therefore very, very right for the user.”
The third big shift in how AdGreen operates this year is the project inviting contributions towards The AdGreen Levy, which has the full support of the industry trade bodies including the APA, AOP, IPA and ISBA will be collected by UK-based organisations providing production services directly to the advertiser and then passed on to AdGreen on a quarterly basis.
The AdGreen Levy, which is being introduced from June 1st, is a recommended 0.25% of the cost to produce an advertising asset – or £2.50 per £1,000 of relevant spend. The AdGreen team will review financials on an annual basis, with the levy percentage reducing as more advertisers decide to contribute.
It is a voluntary contribution, but Jo stresses how vital it is to what she and AdGreen are doing. “Advertisers have to decide whether they want to contribute,” she says. “But we would hope that if their production partners are using the tools, intending to use the calculator, downloading the resources and going on the training, that they would feel appropriate to contribute.”
The levy will fund AdGreen’s running costs, allowing it to continue training, develop the calculator and assess carbon footprints of productions as they come in. As Jo puts it, “it’s how the project will keep going, basically”.

The reason AdGreen’s carbon calculator could be such a game changer is down to its potential to drive behaviour change. Jo enthuses about the gamification aspect of it that she hopes will introduce a bit of healthy sustainability one upmanship on advertising productions. The idea is to draft a rough footprint when a production company first starts a budget that will slowly be refined as more parts of a project get nailed down. “It will generate this information right from day one,” she says. And as the brand, agency, production company and service company can potentially all use the same calculator for a project, each party will be able to see who’s contributed what emissions to what part of a project. “If you have visibility over what your biggest impact is, then you can know that that's the one to focus on doing something about,” says Jo.
It’s easy to imagine how visualising what actions have the biggest carbon footprint will change the way sustainability-conscious advertisers, agencies and production partners will make decisions about how they make their campaigns. Priorities will likely shift.
The resources guide and carbon calculator both divide impact into four activity areas: transport, spaces, materials and disposal. A much bigger portion of emissions come from transport than any of the other three areas, says Jo. That is what we know from albert data, as well as anecdotal experience from production partners who’ve done AdGreen training. “The majority of people come back and say transport is the worst thing and we need to think about it as early as possible,” she says. “And that's one of the key things we're trying to get across.”
Flights are an obvious example. Sometimes flying to a location is necessary, but if everyone involved in a production sees from the start how much air miles are inflating a project’s carbon footprint, they can work out how to offset that. Seeing the data in black and white, it might be easier to argue for one person to fly rather than ten. “Or maybe you could change location so it’s closer”, suggests Jo.
Another priority is emissions from spaces - experience has shown that, because they are out of a producer’s control, it’s hard to minimise their emissions. All a producer can do right now is ask to change certain things. “A studio is unlikely to change their tariffs just for your shoot,” says Jo. “But if enough people ask them, they might well then start to change their mind.
“We can see those sorts of conversations happening once people have visibility of that information - that's what I'm most excited about.”

What You Can Do Now

Right now, there’s plenty of action you can take if you’re involved in advertising productions in practically any capacity.
If you work in the UK advertising production you can sign up for one of the regular, free, two-hour online training sessions that AdGreen offers. These will help you understand the key challenges we face, as well as what can be done at every level to promote environmental sustainability.
You can download the resources guide, which will help you get to grips with what you can do, how you can use your influence and help you offset what impact you are unable to remove.
To make sure you get all updates on the forthcoming carbon calculator, you can sign up to the AdGreen newsletter.
Importantly, all of this needs funding from those who have the resources and responsibility to drive these changes. The AdGreen Levy needs principal production partners to facilitate collection. To become one you’ll need to register to let AdGreen know that you intend to collect payments from your clients and hold them on AdGreen’s behalf until you pass them on each quarter. Submitting the form constitutes consent to be contacted quarterly by AdGreen regarding any payments due.
Once registered, AdGreen recommends discussing the addition of The AdGreen Levy to production cost estimates with your clients. You can also download and tweak a template contract addendum here.
Advertisers themselves are not required to register. However, to give the AdGreen team oversight as to the level of engagement in the industry, they do request that you register with if you intend to contribute.

Results of First Industry Wide Survey, The All In Census to be Unveiled at Summit on June 10th

A Message to Everyone in Our Industry from timeTo