‘This Little Piggy Went to Market in the City’: Inspired by the lack of books that are fun for both kids and parents, Tara Lawall and Rich Greco made their own, poking fun at NYC hipsters, fad diets and more in the process 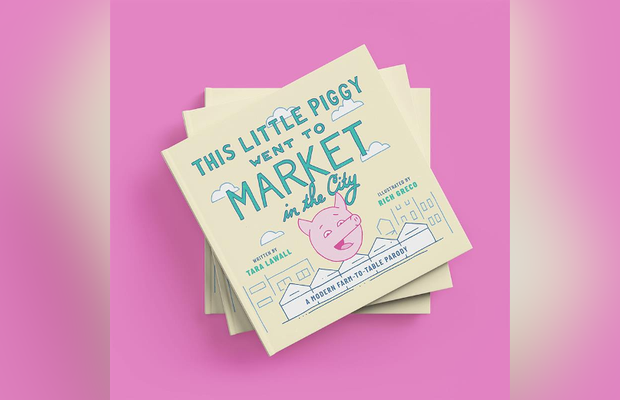 Tara Lawall is a group creative director at Droga5 in New York. Her colleague Rich Greco is an executive designer. They are both parents to two children (different sets of children) and they have made a kid's book together!
But there's a catch. The pair were inspired to make such a thing by the lack of children's books that are fun for kids AND parents to read. So they made their own.
Called 'This Little Piggy Went to Market in the City: A Modern Farm-To-Table Parody', it takes readers through a Brooklyn farmers' market, where the piggies have to deal with insufferable hipsters and crowds. They poke fun at fad diets like Keto and contemplate what composting really is. All of this is underpinned by an illustrative style devised by Rich that is enjoyable for eyes of all ages. It's like a Pixar movie in book form.
LBB's Addison Capper chatted with Tara and Rich about the experiences of flexing their creative muscles to write adult jokes suitable for young ears.

LBB> Tell me about the inspiration for this book. I know that it was centred around the lack of kids books that are enjoyable for adults, so tell me about that - and how you discovered that it was a bugbear for both of you.

RICH> Tara and I have kids around the same age and when they find a book that, for whatever reason, resonates with them, they insist you read it to them over and over. And one more time after that. Every day for weeks and months. Unfortunately, many of these books have dated themes, saccharine characters, poor typography, and so on. We wanted to make a book with adult subtext and illustrative subtleties that allow grown-ups to get something out of subsequent readings, so everyone wins.

LBB> Once you'd decided to give this a go, what was the process like? The end result is a parody on a nursery rhyme - did that idea come up quickly? What other thoughts did you have?

TARA> The idea came from my daughter, who was two-and-a-half at the time. She would do the nursery rhyme on her feet and make up some of her own words like, “this little piggy went to the office.” Which was equal parts adorable and devastating for a working mom to hear. I wrote a rough draft, using a Brooklyn farmers’ market to draw jokes from, and then sent it over to Rich. We then worked together to plus up jokes, write new ones, and figure out what story would also allow us to make the funniest illustrations.

LBB> Tara is listed as the writer with Rich as the illustrator. How did you work together to bring the book and your ideas to life?

RICH> Once the writing was in a good place, I began to sketch out each spread, adding a second layer of visual humour to the narrative where I could — not to get in the way but to compliment. Then we would see where there might be redundancies, missing details, or issues with order and address those changes. The further along we got, the more collaborative it became.
TARA> Rich is the king of sneaking hidden jokes in illustrations. 90% of them I get. The other 10% I just go with because he is funnier than me.

LBB> Tell us about the process of writing this. How did you find the challenge of writing in a way aimed at kids?

TARA> The audience was a big one. Rich and I really wanted to take the ‘Pixar approach’ and write for both the kid audience and the parent audience. Admittedly, some of the jokes and words will go right over the kids heads but it’s always a good time to learn what the word ‘insufferable’ means.

LBB> Despite it being aimed at kids, there are obviously jokes for the parents too. What was the challenge like of weaving in these jokes while still keeping it relevant and applicable for kids?

RICH> I think if all the more mature jokes were removed, you’d still be left with a story to enjoy or at least something that’s colourful to look at. But hopefully those additional gags are what keep readers coming back. It would be great if my kid grows up and still talks to me and says, “wow, what were you reading to me?”

LBB> Can you give a bit of a lowdown on some of those jokes and the overall narrative that you've pinned the book around? What have you poked fun at?

TARA> We kept the structure of the nursery rhyme and built on some of the existing lines and then added pages in-between. So, we have a piggy go to market but then the piggy that stayed home always forgets about the market. The piggy who has roast beef struggles to find an artisanal mustard to go with it. Another roast beef loving piggy asks if it’s ‘keto-friendly’. And the piggy who had none, is dating a cow.

LBB> Rich, what was the illustrative process like? As a designer, I imagine you obviously want this to look nice and a piece of work that you're proud of. But it also needs to appeal to the eyes of kids. How did you find that challenge? What was your approach?

RICH> I had already been developing a style of illustration that was appropriate for children — geometric forms, simplified features, clear expressions. From a design perspective, I chose a bright, limited colour palette and inviting typography. I also developed an underlying grid system based on the cap-height of my handwriting to create consistency from page to page. And pupils. I initially drew the characters without pupils, but later added them in to make the characters seem less sociopathic.
TARA> Wow. I had no idea about this underlying grid stuff. Rich loves a grid. I have long been a fan of Rich’s comic style and love how it makes this children’s book look like it could be a fancy coffee table book too.

LBB> Overall, how did you find the challenge of putting a book together? Will there be a sequel?!

TARA> I loved it. Writing jokes with Rich is just fun. The hardest part was figuring out how to find a book agent and a publisher. Through another advertising mom creative turned children’s author, Jordan Chouteau, we found our book agent Joseph Perry from Perry Literary. Then we got about a year of rejections from publishers who loved the book, but just didn’t think it was enough of a children’s book to be called a children’s book. Eventually we found a partner in Skyhorse Publishing who saw potential in our children’s book, for both parents and kids to enjoy.
There will most definitely be a second book and hopefully more after that. Our second book is another parody but of a different nursery rhyme and this time we also made it more of a children’s book but also written in a humorous way that adults can enjoy too.

RICH> Our publisher says to please review and buy the book on Amazon (which you can do by clicking right here).

Daniel Wolfe and Droga5 Tell a Fable of Wellness for lululemon