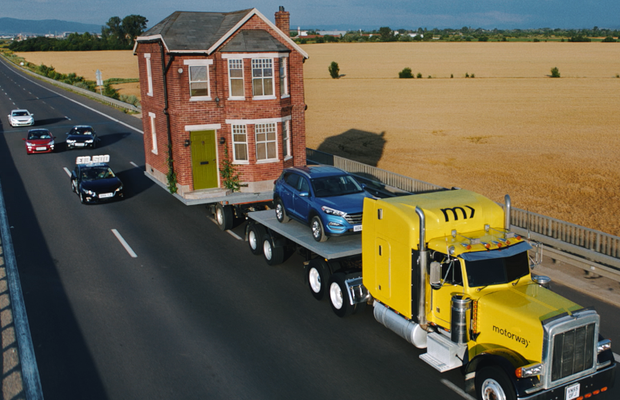 Motorway, the UK’s fastest-growing way to sell your car, has launched a major new campaign spanning TV, OOH, radio and digital. The campaign is the first piece of work from the brand’s new agency line up of Wonderhood Studios and MG OMD, highlighting the range of benefits consumers can get by selling their car the Motorway way.

Motorway helps consumers to sell their car for up to £1,000 more from the comfort of home. It’s simple, fast and free – a car can be profiled and uploaded onto the Motorway website using only a smartphone. Over 3,000 professional car dealers can then bid for the vehicle in a daily online auction, with the highest offer winning the car. Their car is then collected for free by the winning dealer in as little as 24 hours. Cutting out the middlemen and moving the whole process online, Motorway removes the hassle and the haggle, helping car sellers and car dealers get a better deal fast, and all entirely remotely.

The film, directed by Scott Lyon through Outsider, follows the journey of a Motorway customer enjoying the end-to-end Motorway experience for the first time.  As he uploads his car onto the platform whilst relaxing in his bathtub, viewers are given a sneak peek into what happens behind the scenes to get Motorway customers the best deal. Set on an actual motorway, car dealers race against each other to reach the car, all bidding to get the best price. The winning dealer performs a daring stunt from his vehicle to collect the car, ultimately resulting in the blissfully unaware customer getting £1,000 more than expected all while in the comfort of his home. The film ends on the brand’s new end line ‘This is the Motorway.’ The 30 second spot launches during Coronation Street on ITV at 8pm as well as a programme take-over of Deceit on Channel 4 between 9-10pm this Friday 20th August.

The film is supported by radio, social and an OOH campaign launching in September which unveils Motorway’s newly refreshed visual identity.

Lloyd Page, chief marketing officer at Motorway, said: “The used car market is incredibly buoyant right now with people looking for a fast and easy way to sell their car for a great price. We’ve already helped over 65,000 consumers sell their car for more and this new campaign will now propel our brand awareness to the next level, ensuring anyone in the UK who wants to sell a car knows that there is only one way to do it, the Motorway.”

Aidan McClure, chief creative officer at Wonderhood Studios, added: “If you’ve ever sold a car, you’ll know it’s a choice between giving up your day job to get a half decent price or feeling like you may have been short-changed when handing over the keys. Motorway are changing all this and it’s a privilege helping them tell everyone there’s a new way.”

The campaign launch comes after Motorway announced in June that it had secured £48m in venture capital investment after seeing sales triple over the last 12 months. The company has completed over 65,000 car sales through its website since it started in 2017, with a new sale currently being agreed every 10 minutes.

Wonderhood Studios' Encourages Us to Switch off This Festive Period

Planning for the Best: Over-the-Desk Chats with Nick Exford