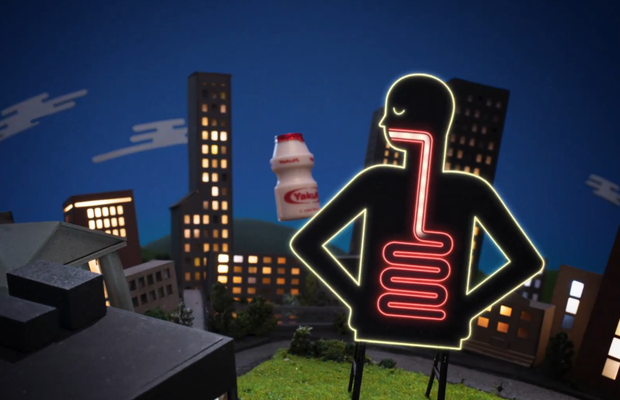 The new positioning and creative for Yakult digs deep into the heritage and mission of brand that, as it turns out, has been dedicated to doing good things for a whopping 85 years. Who knew?

The new campaign introduces the new Yakult tag line of 'The little bottle on a Mission' reflecting the original intention that the brand has always had a much greater purpose than pure commercial success.

Yakult has remained dedicated to the dream of producing a drink with bacteria capable of reaching the gut alive and at the same time promoting happiness and wellbeing. In a world where consumers increasingly want brands that stand for a greater good this campaign gives Yakult a heritage and spirit few really know about.

In the lovingly created film, shot using stop-frame animation, the little Yakult bottle travels round the world on it’s mission to spread good vibes, starting in Japan in 1935, and finishing in modern day Western Europe.

The campaign cuts through in stark contrast to a category that often falls into the trap of lifestyle cliches and yoga poses.

The TV was created by animation studio Jelly and directed by Matthew Cooper.

The print and digital was designed by Ren Reed, Brothers & Sisters Head of Design.

Brothers & Sisters ECD Andy Fowler said: “Yakult is one of the world’s great purpose brands.  They have been dedicated to delivering bacteria to people’s guts since 1935. We wanted to capture the commitment to that purpose and let people know that Yakult is a brand on a real mission to spread joy and the happiness of good health around the world.”

Reshma Patel, Marketing Manager Yakult UK said “Yakult has been committed to its mission over 85 years, this campaign will help strengthen our positioning whilst increasing relevancy towards the product. Not only do we wish to promote happiness and wellbeing backed by science, but also ensure gut health is always at the core.”

Casting: Emma and Laura from Mandy.com

Champion Europe Turns to Brothers & Sisters to Iconise the Hoodie