Your Shot: Imagining The Day That São Paulo Comes to a Halt 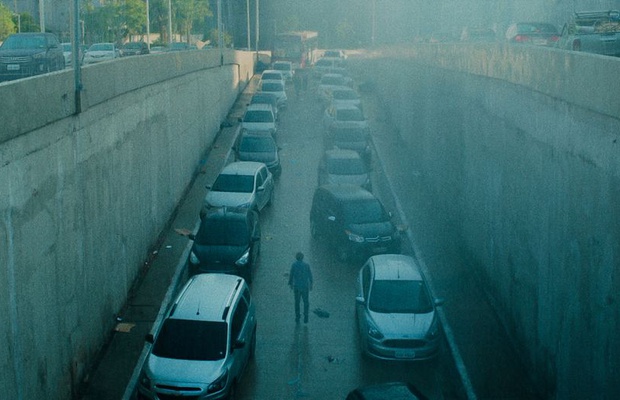 Traffic is an everyday reality for everyone in Brazil’s largest city, São Paulo. Taxi, bus or your own personal chauffeur, it doesn’t matter how you get around - the traffic will have an effect on how long it will take you to get from A to B. Even if you aren’t in transit, the resulting pollution of all that vehicular flux is going to be getting all up in your lungs anyway.
The issue of congestion in São Paulo is such a part of everyday life that, according to Alvin Shiguefuzi, a creative director at Wunderman Thompson Brazil, people often mutter that ‘one day the city will stop’. He and the team at Wunderman Thompson Brazil were tasked with raising awareness for the UN’s Global Goals initiative, as part of a creative partnership between Google, the UN and Tribeca Studios (which is linked to the film festival). They were briefed to work specifically with goal number 11 - Sustainable Cities and Communities - and leant into that idea of São Paulo one day coming to a halt as inspiration for the project. The end result is a brilliant piece of filmmaking, a 17-minute long dystopian tale that manages to feel relatable and frighteningly real. They worked with Saigon Filmes director Vellas to bring their vision to life.
LBB’s Addison Capper chatted with Alvin to find out more about the research that informed the idea and the challenges of crafting an unbranded piece of long form content.

LBB> How did this project come about? Was there a specific brief from the UN? What was it like?

Alvin> The project is the result of a creative partnership between Google, UN and Tribeca Studios to raise awareness for the UN Global Goals through YouTube. In Brazil, Google invited Wunderman Thompson and Saigon Filmes to work specifically with the goal number 11 - Sustainable Cities and Communities.

LBB> What inspired you to focus on urban mobility? Why was this a particularly poignant focal point for you, especially in Brazil?

Alvin> Traffic jams became a routine in São Paulo, the largest city in Brazil. It’s an everyday subject for us. The first thing I do when I wake up is check the weather. The second is checking my ETA to work. We even have radio stations dedicated to updating traffic. It's commonplace to hear people complain about traffic in São Paulo. Everybody keeps saying that ‘one day the city will stop’. This drove us to set urban mobility as the major point of convergence. Regardless of the method of transportation used, traffic jams affect the lives of people living in São Paulo every day, in different ways: whether because of the chaotic everyday traffic, pollution, violence, geographic inequality, among many other themes.

LBB> Your idea and narrative is based on some quite shocking data - can you tell us a bit more about the research and findings that you landed on?

Alvin> We started by discussing the problems that impact us directly. The obvious ones, like the time spent in traffic and the visible pollution in the sky. So we found out that people spend, on average, more than a month (36 days) of their year in traffic. This information had a huge impact on us. So we kept digging to find the most shocking data that could help us bring people’s attention to the problem.

LBB> Once you had the idea to focus on urban mobility, what was the creative process like from there? Where did you look for inspiration for the narrative? Tell us a bit about the story.

Alvin> In this case, both the inspiration and the idea came up together. As mentioned before, everybody here keeps saying that ‘one day the city will stop’. The idea came from that: what would happen when that day finally comes and Sao Paulo stops for good? So we started imagining this chaotic scenario and how it would affect people. The story we wanted to tell was a mix of entertainment and information, showing people an utopian scenario based on real data.

LBB> How did you find the challenge of writing a longer piece of content like this? And developing the characters within it?

Alvin> That was a huge challenge for us. We usually work with an advertising mindset, even when creating content. But we had never had the experience of writing a longer piece like this. So we wrote the first few treatments of the script and later on co-created the final versions with José Carvalho (Roteiraria) and Vellas (Saigon). It was an amazing experience. We learned a lot in the whole process.

LBB> Why was Vellas the right director to bring your vision to life?

Alvin> Vellas’ works are always overtaking/trespassing the advertising barrier. The quality of his work was a perfect match to our ambitions. We were very happy when he accepted the challenge and joined us in the project.

LBB> What were the main aims with this project? What change do you hope to see in the future?

Alvin> If we don’t take action now, 'Cidade Inerte' can tragically become our fate. We want people to recognise themselves as part of the problem and the solution. Our task is to inspire more people to change. We need to raise awareness around the problem. As our final message says: The city doesn’t have to stop for people to start moving.

Alvin> Our approval was in English while the whole film was made in Portuguese. So we needed to translate everything, everytime. And we had a lot of changes in the cuts, voiceover, letterings, etc. It was hard because it’s quite a long piece, but a lot of people helped us all the time. (Thank you Nina and Danielle!)

Alvin> The Covid-19 pandemic outbreak happened [in Brazil] in late March, right after we finished recording. As it happened with the whole world, we felt the deep impact of the quarantine directly in the way we worked, of course. But the pandemic also put us in a very uncomfortable situation. The film is about a city completely crowded and inert by its traffic jams and individual thinking. The city, suddenly, is completely empty. The news started showing how the quality of the air was improving. At some point, we started questioning if we had made an important film for a world that no longer existed.
As the months passed by, the pandemic hasn’t even ended, and yet São Paulo is almost back to what it used to be. Sadly, our film is still very pertinent and hopefully it can help us all rethink what city we want to live in.