Your Shot: Why Air Canada Treated This Entire Pub of Expats to a Round Trip Home 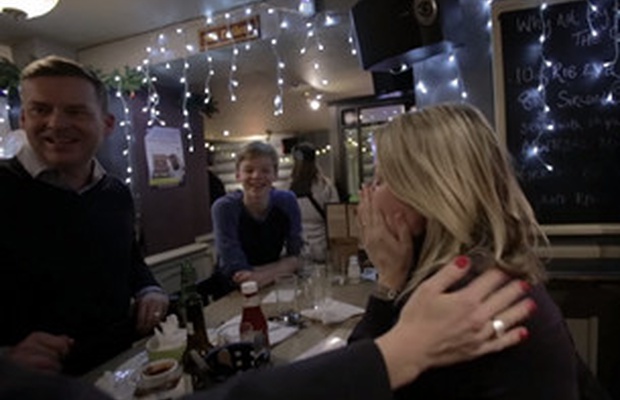 Happiness, presents, food, booze, singing and Santa. Christmas is about all those things and more. Perhaps most important during the festive period, though, is hanging out at home with your family. But for expats living abroad – of which there are tons in the global advertising clan – being with family over Christmas is rarely the case. Whether for financial reasons or lack of time, trekking back across the world at the busiest time of year is tricky business. With that in mind, Air Canada went and treated a bar full of Canadian expats in London to a round that meant so much more than a measly pint of beer. The stunt involved Air Canada crew and pilots waltzing into London’s The Maple Leaf bar and announcing that every attendee was to be given a free round trip back to Canada, which spurred an off-the-cuff rendition of Canada’s national anthem ‘O Canada’. It was conceived by JWT Toronto, so LBB’s Addison Capper caught up with art director Alex Newman, broadcast director Caroline Clarke and the rest of the team to get the full story.

LBB> What was the initial brief like from Air Canada? And what was their reaction when you pitched this idea to them?

JWT> The initial brief was to do something own-able and true to the spirit of Air Canada. To tap into an insight that everyone can relate to over the holiday season.

AN> When we first presented the idea to Air Canada, it was met with excitement and a ‘let’s do it’ attitude. It’s rare in advertising to have an idea come out the same as it was presented – so it makes me proud that none of the edges were cut off.

LBB> What key insights drove the campaign? Was it always the plan to stage some kind of giveaway?

JWT> The key insight that drove this campaign was rooted in what Air Canada does for Canadians over the holiday season – which is bringing them together. Knowing that not everyone makes it home for the holidays, we found a very natural way for the brand to offer something unique. A giveaway wasn’t mandatory, but it is the season of giving, after all.

LBB> The whole thing must have been very ‘on-the-night’ and reliant on everything going smoothly - can you tell us a bit about the pressure of producing something like this?

JWT> With a shoot like this you don’t get multiple takes. Everything has to go off perfectly on the first try – there's no stopping the pilots after the announcement and asking them to start again. You just do as much preproduction planning as possible, work through all the logistics in advance and make sure you have the right people on board with the right attitude toward an event shoot. You have a plan for how things should unfold and you have to have people who are quick on their feet in case things change.

LBB> And can you tell us a bit about the logistics and planning involved? Were they really Air Canada employees on the night?

JWT> There were multiple logistics to consider on a shoot like this. Firstly, you need to get a production company on board. This isn’t a typical commercial shoot so you don’t want a typical commercial director. You need a team that can handle documentary-style filming, can work with non-actors, and be ready to shoot moments as they unfold in real time. This type of shoot is a real team effort. And the bar. We needed to get the bar involved and excited about the idea of filming there but without telling them the whole story – we wanted them to be surprised too! The Maple Leaf Bar also helped us by inviting Canadian ex-pats to show up that night. Finally, working with the Air Canada crew.  They were indeed real pilots and cabin crew. They were all amazing to work with.

LBB> What was the atmosphere like in the bar?

JWT> We could not have asked for a better night. The bar was packed and there was lots of good energy before we even started filming. We knew how we hoped the bar would respond but it was beyond our expectations. It didn’t take long for the pilot’s words to sink in and the cabin crew to enter with additional tickets leading to tons of cheers, high fives and lots of tears. It was quite emotional to watch.

LBB> A lot of Christmas campaigns are, in some way or another, quite moving and emotional. But with this you’re actively giving something back and doing some good. How did working on it affect you personally?

AN> As a Canadian who has lived abroad, I know how painful it is not be with family during the holidays. So in a way, this idea came from a very personal place.

CC> Being with family is very important to me and I’ve been lucky enough to always be home for the Holidays – seeing the hugs and real tears streaming down the faces of people young and old was incredibly moving.

LBB> What were the most memorable moments and which reaction sticks in your mind the most?

JWT> Having the bar spontaneously break out into ‘O Canada’ was amazing. Those are the unexpected moments that just make things that much more incredible.

LBB> Why was London the right city to focus on?

JWT> We did a lot of research on Canadian ex-pat bars around the world and some bars are fully dedicated to Canada while some only hosted Canada nights. What we loved about the Maple Leaf in London was it really oozed Canada. On top of that, London is such a destination for Canadians living overseas – we felt confident we’d have a great Canadian turnout. London is also a great holiday setting.

LBB> Is the film set to air on TV too or just online? Is any other media planned?

JWT> The piece isn’t meant to air on TV, but there is online paid media. Thankfully this video has taken on a life of its own and continues to grow organically online.