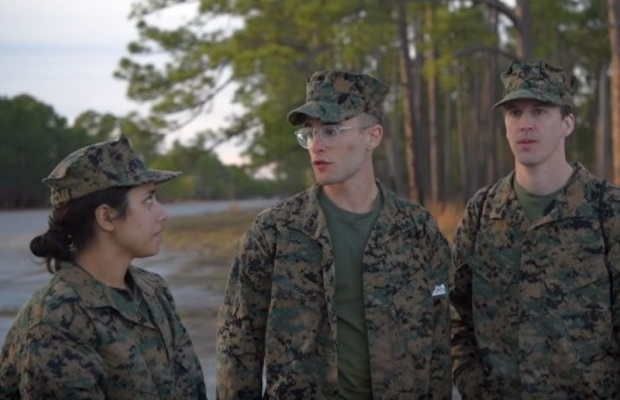 The United States Marine Corps has been defined by their fighting spirit for 243 years. But for today’s youth who are ambivalent about the military, the question is: which battles today are worth fighting? As technology and media have changed consumption habits and limited the effects of advertising, the Marines enlisted the help of those voices most prevalent in their lives today — YouTube content creators — to help answer that question.
This unique program was developed from a need to reach the youth audience and share the story of how Marines are trained to overcome any challenge. The Marine Corps created a three-day version of their legendary boot camp, set at Parris Island, South Carolina, and challenged four content creators to make it through the entire three days. The moment the creators set foot on the island they were met by their drill instructors and escorted through a grueling schedule of activities that included all of the most feared recruit training challenges: the Confidence Course, the Rappel Tower, the Gas Chamber and the Crucible Hike.
Each creator told their own story of their time on the island and shared the videos with their YouTube followers. The authenticity of their experience – including the reality that not everyone makes it through Marine Corps recruit training, as demonstrated by the fact that one creator quit mid-program – plus the quality of their storytelling led to a phenomenal 159 mm organic impressions within the first month alone, as well as 6.5 mm views across all of the videos.
"Marine Corps Recruit Training is extremely tough and challenging. What better way to get that experience in the faces of hyper-connected young people is through an equally gritty and immersive sneak-peek of how we make Marines -- all captured through the personal experience of digital influencers," said LtCol Christian Devine, director of marketing and communication strategy for Marine Corps Recruiting Command.
"In some ways we’re a 20th century brand that needs to bridge with the 21st century mentality of American youth. Yet we may share a common ideal: the search for belonging and higher purpose. That ideal still spans generations, and it's our responsibility to find contemporary ways to continually re-evaluate and connect with young people about military service -- particularly as a U.S. Marine. In an era where there is a growing disconnect among the American population and those who have served in uniform, we must employ relevant marketing tactics to bridge that chasm to make the next generation of global difference makers."
“The battles recruits have to fight to earn the title Marine are figurative. They have to defeat adolescence, selfishness, fear, and doubt at Recruit Training,” said Sean McNeeley, account lead on the Marine Corps business at J. Walter Thompson Atlanta. “We wanted a broad audience to see how people they admired and followed on YouTube faced those challenges. Ultimately, they all gained a deeper appreciation of the cause that makes those battles worth fighting.”