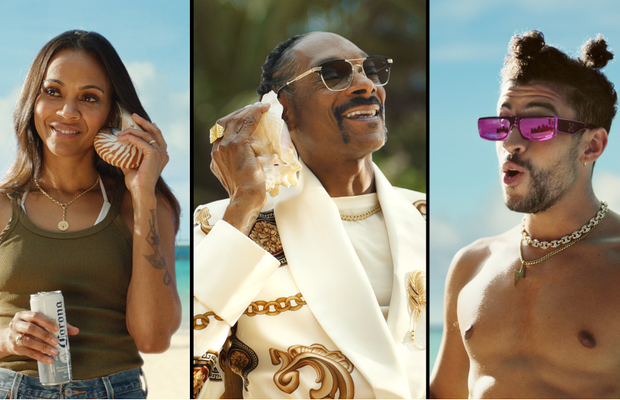 Working towards a 'better you' shouldn’t have to feel like work. As the new face of Corona Premier, the 90-calorie light beer from Corona, international star and advocate for Hispanic voices, Zoe Saldana, will join the Corona cast to represent a La Vida Más Fina perspective on wellness.
“There’s no better way to go with the flow of life than with a cold beer. It’s always been in me to strive for a balanced perspective, and together with Snoop, Bad Bunny, and Corona we are encouraging people to live ‘La Vida Mas Fina’”, commented Zoe.
Continuing the narrative from Corona’s 'Shell Phone' commercial that debuted this past fall, the new :30 second spot titled 'Zoe Makes Three' features Snoop and Bad Bunny adding Zoe to a three-way call just to say 'hey', officially making her a part of la familia Más Fina.
The film will debut this Sunday evening during the U.S’s 78th annual Golden Globes and additional work will begin to roll out throughout the spring.
“We are thrilled to welcome Zoe to la familia and look forward to having her pick up the shell phone for Corona Premier!” said Ann Legan, vice president of brand marketing, Corona.
In partnership with MullenLowe Los Angeles, Corona’s 'La Vida Más Fina' campaign launched in August 2020, with the original godfather of chill, Snoop Dogg, and joined shortly after by Latin crossover artist, Bad Bunny. In the campaign, each pop culture icon brings their unique perspective on what truly makes life finer, featuring perspective on time, relationships, priorities, and the keys to contentment.
As written on every bottle, Corona is crafted to be 'La Cerveza Más Fina' ('The Finest Beer'), and the campaign takes this philosophy a step further. Translated as 'The Fine Life', the tagline is intentionally in Spanish, symbolising a heightened recognition of Corona’s heritage and the growing Hispanic population in the United States.